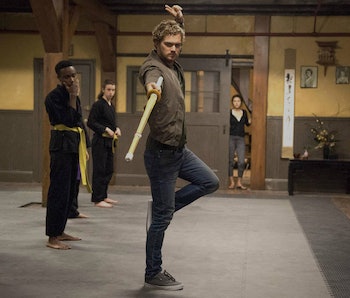 Marvel’s Iron Fist — which is the latest in the Netflix series that has included Daredevil, Jessica Jones, and Luke Cage — is not just the name of the show itself. It also describes the character Danny Rand’s actual superpowers. In most of its episodes, after briefly talking about finding his chi like a college student who spent a semester backpacking in Southeast Asia, Danny Rand’s hand glows. When he makes a fist with this glowing hand, he’s able to punch through any kind of barrier, even if it’s a steel door or a building. This helps him out of several tough situations — but the initial crop of episodes are rather vague about the mythology behind his power. Spoiler alert, there’s a dragon involved.

Danny Rand learns how to summon the mystical force of Iron Fist over the course of his unusual childhood. Rand was born to wealthy parents in New York City, not unlike Bruce Wayne. His parents also died when he was young, not unlike Bruce Wayne. However, what sets Rand apart is that his parents died in a plan crash in the Himalayas. Rand subsequently ends up growing up with monks in the mystical city K’un-Lun — think Brigadoon with an Eastern bent, as it only connects to the real world once every ten years.

In the comics, Rand’s father has his own ties to K’un-Lun. The show has not explicitly stated this over the course of the first six episodes made available to critics. But during his childhood and teens, Danny Rand is the apprentice to Lei Kung the Thunderer, K’un-Lun’s greatest warrior. Like all basic Chosen One narratives — Neo, Luke Skywalker, Harry Potter — Rand proves to be a gifted student.

After years of training, Rand attains the power of the Iron First when he’s 19 and casually defeats the dragon Shou-Lao the Undying. Shao is a [man who was a man transformed](http://marvel.com/universe/IronFist(Danny_Rand) into a mystic serpent over a thousand years ago. He guards his heart, which is located outside of his body. Rand kills Shou-Lao by deducing that the dragon-shaped scar on his chest guards his life energy. He uses his own body to apply pressure until Shou-Lao dies, burning a dragon tattoo on his chest in the process.

Rand then walks into its cave and punches his fists into the molten heart, thus attaining the power of the Iron Fist.