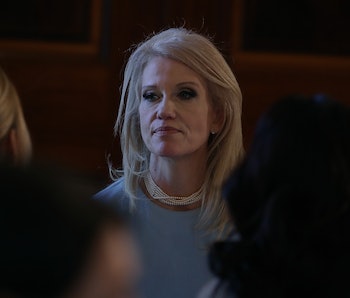 Kellyanne Conway, counselor to President Donald Trump, said Sunday that Americans could be surveilled by “microwaves that turn into cameras,” which, unless she knows something we don’t, would be a pretty hard thing to pull off.

Conway somehow got on the subject during an interview with The Record of Bergen County when asked whether or not she knew that Trump Tower was wiretapped.

“What I can say is there are many ways to surveil each other now, unfortunately,” Conway said. “There was an article that week that talked about how you can surveil people through their phones, through their — certainly through their television sets, any number of different ways. And microwaves that turn into cameras, et cetera. So, we know that is just a fact of modern life.”

But Conway didn’t offer any information to back up her claim that the primary vehicle for cooking Hot Pockets can be made into a spy gadget, nor did she offer further proof or justification for the Trump administration’s phone-tapping claims. She wasn’t completely off-base, however — Conway also mentioned that TV units could be used to spy on people, something the CIA can probably do, according to the recently released Wikileaks Vault 7 documents. But a microwave is a very different sort of beast.

A smart TV comes with a bunch of hardware that makes it a good hacking target. It’s connected to the internet, and it has a camera and microphone built in. There is at least one internet-connected microwave which might have voice tech that could be worth hacking for spy purposes, but even that isn’t going to turn into a camera.

According to the Vault 7 documents, the CIA’s weapon of choice for surveillance through the Internet of Things is an “automated implant system,” which isn’t really dangerous to a microwave that isn’t connected to the internet (sorry, Maidoven). It also would have no way of magically turning a simple microwave-emitting device into a camera.

While it’s certainly possible to conceal a camera inside a microwave, the same could be said of pretty much anything. And co-opting the microwave’s actual function to a surveillance device would be next to impossible.

Microwaves are often used for detecting differences within an object, like scanning for breast cancer, and can potentially be used for detecting weapons. But the trick here is that you have to be able to put the object you’re scanning inside the microwave, and that array has to be connected to something that can analyze it. What you can really see is differences in material — cancer cells in healthy tissue, or a metal gun next to a body — but you have to know what materials you’re looking at to know what things mean.

So if you happen to have added a computer to your microwave and connected it to the internet, maybe someone could look at your leftover casserole, but even then they’d have a hard time figuring out what’s inside of it unless they were searching for a Glock hidden in the leftovers.

To give Conway the benefit of the doubt, maybe she’s talking about old school spyware, and hiding cameras in microwaves. But saying “microwaves turn into cameras” suggests that your microwave could be taken over with spyware and used to watch you heat up frozen burritos. That’s basically not possible, unless you have built a giant microwave array that you can walk into and some really hardcore image processing A.I.

Conway has responded to the interview Monday morning, calling coverage “fake news” for reporting that she said that President Obama spied on Trump through his microwave.

She has emphasized that she was talking about surveillance in general, not necessarily the campaign.

Conway does not directly say that she thinks Obama used a microwave camera to spy on Trump. But her roundabout answer heavily implies, without outright stating, that Obama could have used any of the listed surveillance techniques — one of which we know is completely bonkers — to tap the White House. And no matter whether she was referring to the campaign or general spying technique, it’s still ridiculous to say that microwaves can be turned into cameras.