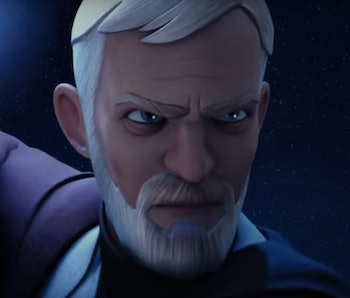 Even though Darth Maul’s double-bladed lightsaber also serves as a cane to help his aging half-cyborg body get around, that isn’t stopping him from swinging it around like a murdering assassin. In the next episode of Star Wars Rebels Obi-Wan Kenobi and Darth Maul are set for a rematch, which may end in death for the scrappy, former Sith Lord.

Since being cut in half by Obi-Wan Kenobi at the end of The Phantom Menace, Darth Maul has had an impressive career. He teamed up with his brother, became a criminal, and even briefly ruled the planet Mandalore. In the era of the Rebellion, Maul has permanently jettisoned his “Darth” title and pursues a personal agenda, likely fueled by madness. After forging an unlikely alliance with Ezra Bridger, Maul has acquired all the information he needs to give his life some kind of purpose. He’s going to take on Obi-Wan Kenobi, the person who screwed his life up in the first place. A new clip from Disney XD has Darth Maul wondering “Will it end here? Like this?”

On March 18, Rebels will air possibly its most anticipated episode yet. Titled “Twin Suns,” the long-awaited confrontation between Obi-Wan Kenobi and Darth Maul is actually not their first rematch in canon since The Phantom Menace. In fact, Obi-Wan crossed paths with Maul a bunch on The Clone Wars which culminated in Darth Maul killing Obi-Wan’s secret girlfriend, the Duchess Satine of Mandalore. This is notable for a lot of reasons, but it highlights an added motivation Obi-Wan will have for taking Maul down for good.

Though part of the official Star Wars canon, the animated shows have rarely actually killed off a well-liked character onscreen. Even when Ahsoka Tano fought her old pal Anakin Skywalker/Darth Vader in the Season 2 Rebels finale, the duel resulted in a draw. So, the death of Satine in The Clone Wars still stands as an uncommon deviation for the The Clone Wars and the animated shows in general. From a continuity standpoint, it made a little sense: Obi-Wan Kenobi couldn’t have become the lonesome Jedi everyone remembers from the original movies if he secretly had a lover stashed away somewhere. So, now that Obi-Wan is in a rematch with Darth Maul, it stands to reason Maul is going down, if for no other reason than it would explain why Darth Maul isn’t running around messing with people during the classic films.

But what about Ezra? Since the young Jedi is on Tatooine in this episode too, should viewers be concerned for his fate as well? If Ezra also dies on Tatooine, it could motivate Obi-Wan to be less sedentary in his Jedi ways. Ezra’s death would also explain why Yoda and Obi-Wan don’t recruit him for help in the Empire Strikes Back era, too.

With these big events wrapping up its third season, Star Wars Rebels might create major plot developments that not only effect its own internal continuity, but could reverberate backwards an forwards on the whole Star Wars timeline.