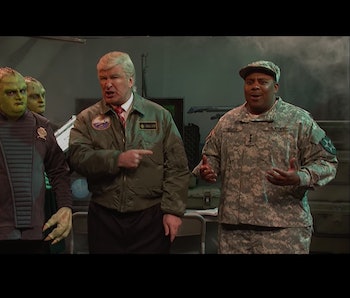 The aliens from Zorblatt 9 did not come to Earth to teach humans a new language or to fight crime. These telepathic beings came in their invisible ships to kill all humans. In its cold open this weekend, Saturday Night Live imagines what America’s response to a violent alien invasion would be like with Donald Trump as president.

Spoiler alert: It does not go well.

The sketch opens with Kenan Thompson delivering a stirring, Independence Day-style speech to rally the troops.

“Men, women, the hour is upon us. The aliens are stronger than we thought, which means the fight for humanity begins now,” he says. “We may be down, but we are not out! We’ve lost limbs, we’ve lost lives, but we will not lose the United States of America!”

Thompson then introduces President Trump. Alec Baldwin, sporting his blonde Trump wig and a bomber jacket, strolls onto the screen, bobbing his head and pursing his lips. He points his finger and waves, evoking Trump at his campaign rallies.

“Hello, yes, what a beautiful day,” he casually says to the gathered soldiers. “Who here loves Trump? I know this guy over here, he loves Trump,” Baldwin says, pointing at a charred corpse. He then proceeds to deliver the speech that we all could imagine the president delivering if aliens invaded.

“Now here’s the deal,” he says. “We are going to beat these aliens because we’ve got the best military, but we don’t win anymore. And the aliens are laughing at us. They’re killing us and they’re laughing at us.”

Thompson cuts him off and asks him what they’re going to do to fight the aliens. His response? Deflection.

“We’re going to bring coal back. We’re gonna have so much coal, you’re gonna say, ‘Where did all this coal come from? I never knew there could be so much coal.’”

Thompson cuts Baldwin off again to tell him California has been vaporized. Baldwin’s Trump seems relieved because this means he’s now finally won the popular vote — and eliminated his Apprentice rival Arnold Schwarzenegger.

The sketch continues with some trademark Baldwin Trump exaggerations, unhinged, racist claims of shapeshifting aliens, and a bungled pledge of allegiance until the Zorblattians finally make their appearance.

“Take me to your leader!” they demand.

“It’s him!” cries Baldwin, pointing at Thompson. “He’s the president!” The Zorblattians are encouraged by the confusion.

“This is gonna be so easy!” exclaims their leader, echoing what everyone is probably thinking.

More like this
Entertainment
November 14, 2022
'Secret Invasion' will be a big "departure" from previous Marvel shows, star says
By Eric Francisco
Science
November 21, 2022
One unexpected Solar System moon could be key to finding alien life
By LAURENCE TOGNETTI and Universe Today
Entertainment
November 27, 2022
The Guardians of the Galaxy Holiday Special reintroduces an unexpected comic book hero
By Alex Welch
Share: