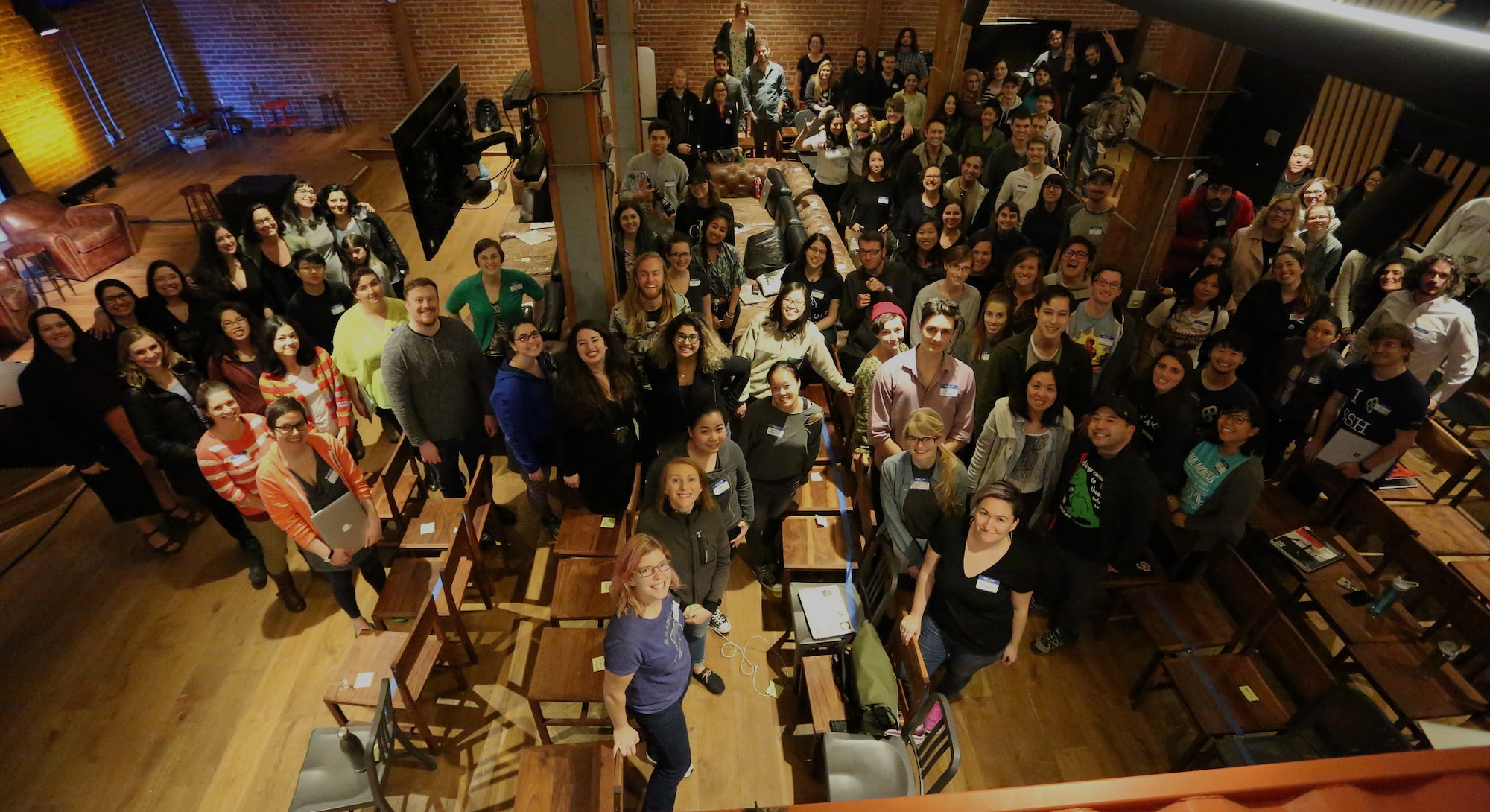 Kate Bertash levels this assessment of her opposition: “No one can deny that anti-choicers are pretty creative.” She’s talking to an audience of pro-choice activists, who also happen to be coders, all gathered to make apps that will circumvent barriers to abortion information available online. “Anti-choicers,” Bertash says, “are unrivaled in their tenaciousness, using urgent language in ads targeted at those experiencing an unintended pregnancy. They’re not afraid to throw around altered, or even false, statistics. They’re not to be underestimated,” she warns. “One of our biggest hurdles will be getting through all of the misinformation being pumped onto the internet.”

The pep talk of sorts is happening inside the San Francisco headquarters of GitHub (a website for programmers to collaborate on projects by sharing and updating code), where nearly two hundred programmers have gathered for an event called the Abortion Access Hackathon, organized to mobilize coders for a cause. Over the next 48 hours, they will write code and create apps that reveal useful information about abortions — which is surprisingly difficult to do because of a politicized climate — from obfuscated places on the web. It turns out the coders are pretty creative, too.

But right now, they’re watching a presentation about “crisis pregnancy centers” in Texas. The centers, often located in strip malls, are made to look like doctor’s offices — but they definitely are not — and in the words of NARAL Pro-Choice Texas, “exist to prevent people facing unintended pregnancies from accessing abortion services.”

To drive home the point, Bertash, the event’s primary emcee, declares a rhetorical: “We all know what these centers are, yes?”

A map of Texas projected on the wall shows an overwhelming number of the centers in the state. When the map is compared to one showing abortion clinics, the difference is stark. Around twenty abortion clinics closed in the state after the passage of a controversial 2014 law that was later blocked by the Supreme Court.

In 2014, the latest year for which data is available on the Texas Health and Human Services website, there were 55,140 abortions performed statewide for women aged 13-44. Advocacy group Fund Texas Choice tells Inverse there are 13 active abortion clinics in Texas, based on its hotline data from the last year, in Fort Worth, Dallas, Austin, San Antonio, Houston, El Paso, and McAllen.

Bertash says crisis centers are intended to frighten patients with unintended pregnancies and spread misinformation about abortions. “In some cases, they’re federally funded,” chimes in a coder from the audience.

The crowd nods along and laughs when Bertash said she wanted everyone to brainstorm tweets aimed at Donald Trump. Dressed all in black with a large, flashy belt buckle, she’s clearly more comfortable in the spotlight than any of the programmers. She joined the event after its first iteration in San Diego, which was originally the brainchild of Shireen Whitaker, a Legal Monitor for Women’s Health Specialists. Sisters Emily and Somer Loen, who ran the first Hackathon with Whitaker, co-organized the 2017 event with Bertash.

Bertash swaggers like a comic doing crowd-work; her confidence is striking as she manages coders, who, despite being politically defiant and remarkably skilled are, essentially, nerds. The crowd comprises front- and back-end developers, UI/UX designers, an art director, a lawyer, a policy researcher, a social media coordinator, a nurse practitioner, and precisely one CEO. Most declined to identify where they worked, though the organizers say well-known Silicon Valley companies were represented, as well as smaller start-ups.

Bertash has been at the hackathon game for a while, she says. “I had worked on a couple hackathons with Debug Politics before this one. I studied public policy in grad school and made my way into tech by way of Google.” On the sidelines of the event, she told Inverse a little more about abortion access hackathon.

Does President Trump cast a shadow over this event?

I think we were hosting the sort of people who might actually feel traumatized by some of the Trump administration’s policies. It’s important to take care of yourself and allow yourself space to be sad, but our event was about the next step. We can still be productive.

Coding and abortion rights are an unusual pair of topics.

Tech is an excellent way to apply the constraints of the law to your processes. Code is really effective at automatizing the process of adhering to complicated systems of rules, right? And the information one needs to navigate abortion law is purposefully made obtuse by those who want to make getting an abortion difficult. If the very nature of coding and natural language processing parses complex data, it’s a way to organize complex systems into something digestible.

Automation is excellent at administrative labor too. Notice many of the projects people came up with [at the Hackathon] weren’t building a better mousetrap. They were just applying the high-efficiency systems that many private tech companies take for granted to organizations that operate on shoestring budgets. Scheduling, communications, onboarding, intake. The tech world has deep pockets to perfect these systems, but not every field does.

Was there a culture clash between coders and social issue advocates?

There are a lot of wonderful conversations in tech around diversity. We’re all getting more active in building out diversity and inclusion teams. When you invite different kinds of people to build your products, you end up getting a lot of different perspectives.

Don’t you get blowback from within the tech community on a subject like abortion?

I will say it was difficult to find a venue. Quite a few companies responded to my request with, “ooh too political.” Some even asked me to change the event name, to which I said, “uh, no, I’m not doing that.” I was honestly surprised that more companies didn’t lie or make up some excuse — oh sorry, we’re all booked up that weekend — rather than actually telling me it was too political.

I did push back a bit in some cases. I said something like, “well, I hope you tell your employees who are able to become pregnant that this kind of event is too political for you.” The thing is, abortion is a legal procedure, not to mention, I know a lot of tech companies that are willing to host black hat hacking events. So…

But GitHub came through.

GitHub really walks the walk. They took excellent care of us.

The hackathon ended on a Sunday evening with presentations from each coding team on their apps, websites, and databases. Most apps aimed at patients had feminine names and slogans: “Meet Mya” and “Amelia wants you to have a good experience.” The information systems created either upped security at abortion clinics or facilitated the process of onboarding and assigning volunteers at non-profits. Many projects were completed using Swift/XCode (for iPhone apps) and Rails (for web platforms).

Completed projects included Termina, an Android app that gives users a digestible timetable for their abortion, with directions to local clinics, after posing three questions, and Rhetorical Uterus, a web app that coaches users through difficult debates with pro-life loved ones. Choice Starter, a fundraising web app, allows users to crowdfund their abortions, which popular sites like GoFundMe and CrowdRise do not allow. Contribu, an iPhone and Android app, targets the fact that millennials donate to social causes more often than previous generations, and makes a public, social media-fueled contest out of donating small change to abortion funds.

Bertash says there’s interest in further abortion hackathons in New York, Los Angeles, and Chicago. Given that the second event’s attendance totaled almost 200, compared to the original event’s 20, she’s hopeful. The two-day SF hackathon felt like it had high stakes, perhaps because of the candid conversations many coders had about pregnancy and politics.

“I urge programmers at hackathons like this to really imagine their user,” Bertash says. “Walk hand in hand with them through the process they’re navigating. What steps are you allowing them to skip?”

Judging by many of the projects developed over the hackathon, coders hope to allow users to side-step the political barriers between them and legal, safe abortion. Ken Knight, a freelance UE and software designer who attended the hackathon, says he’s excited about Bertash setting up the Tech and Abortion Access Coalition (TAAC) to “keep the tech community engaged long-term as a more reliable volunteer pool”. Going forward, Bertash and the hackathon volunteers want to ensure that programming is a more readily accepted and useful tool for increasing safe, legal abortion access.

Interview edited for clarity and brevity.