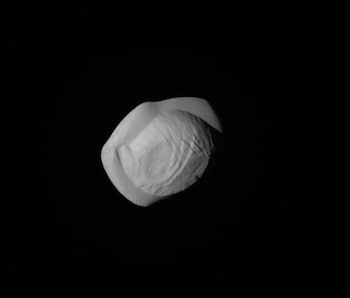 Saturn, with its vibrant colored gas storms and huge, majestic rings, is almost certainly the most beautiful planet in our fair solar system. One of its 62 moons, though, looks like some al dente-ass pasta nightmare, as seen in some new pictures taken by the veteran spacecraft Cassini.

The moon, Pan, is Saturn’s second-innermost tagalong, and it’s only about 35 kilometers across. What makes it so interesting, as plainly seen in the new pictures, is that it’s not round. Pan has been charitably described as walnut-shaped, while others might think it resembles a UFO straight out of retro science fiction. We’re going with space ravioli, since the giant equatorial ridge running around Pan makes it look like some hand-made Italian pasta.

Pan looks so messed-up because it actually orbits within a gap in Saturn’s famous rings. As it circles around in that narrow strip, Pan draws in bits of the material and debris that make up the rings with its own meager gravity, and these new additions pile up around the moon’s waist, so to speak.

Cassini, which will end its nearly two-decade mission in space this September when it plunges into Saturn’s atmosphere, took these photos of Pan on March 7. NASA says the probe was just 15,268 miles away from the moon, making the new images the closest-ever look at Pan by far.

Earlier this week, Cassini took pictures of another of Saturn’s moons, Enceladus, which actually looks like a normal moon and not some factory floor reject.