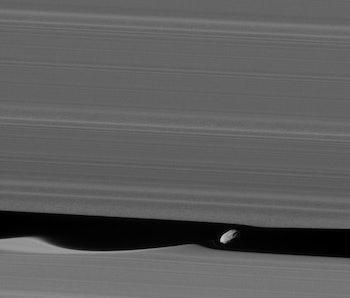 On Monday, NASA’s Cassini flew by Daphnis, a special moon of Saturn that’s known as a wavemaker. Even though it’s quite small (only five miles across), Daphnis has the unique ability to create visible “waves” on Saturn’s rings as it orbits the planet. Cassini managed to capture this spectacular phenomenon as it was unfolding, and the resulting image looks beyond amazing.

As you can see, the peaks underneath Daphnis are the waves the moon’s gravity creates on the rings as mosey’s along. The wave on the left is a bit softer likely because the ring particles are starting to spread out again as Daphnis moves away.

Cassini’s image is the closest view we have so far of Daphnis. Daphnis appears in between the Keeler Gap, a gap in the the A Ring, one of Saturn’s large rings. The gap is 26 miles wide, but it appears narrower because of Cassini’s viewing angle.

Daphnis appears to have an ovular shape. Like some of Saturn’s other moons, like Atlas and Pan, Daphnis has a narrow ridge around its equator. Its surface is relatively smooth, most likely because it accumulated fine particles from Saturn’s rings. But it also has some craters and ridges.

If you look closely to the left of Daphnis, there’s a really faint line. This line comes from Daphnis drawing a packet of material from the ring, and now the material is spreading out.

This image also shows us details of Saturn’s rings. The rings that surround Daphnis have a grainy texture, which come from particles clumping together.

Cassini has been in space for the past two decades, starting in 1997. In 2004, it reached Saturn, and since then, it has visited some of Saturn’s other moons, like Prometheus and Enceladus.

Last November, Cassini started grazing the outer orbits of Saturns main rings. Cassini’s “Grand Finale” will begin in April, where it will take deep dives into Saturn’s rings. And in September, we’ll say goodbye to the spacecraft as it plunges headfirst into Saturn’s atmosphere — where it will be irretrievably consumed, but not before collecting and transmitting as much data as it can.