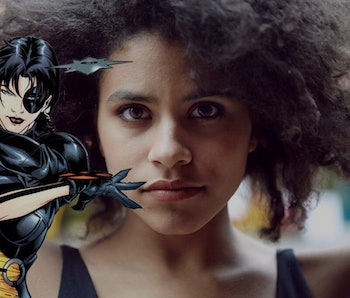 At last, Deadpool 2 has found its Domino. In a picture tweeted out by the Merc with a Mouth himself, Ryan Reynolds, the Deadpool lead announced that Atlanta star Zazie Beetz will play the mutant sniper Domino in the hotly anticipated sequel, which is aiming for a release date next year.

On Thursday afternoon, Reynolds tweeted a photo of dominoes that spelled out “Zazie Beetz” with the punny caption: “Domino Effect.” Zazie Beetz is something of a surprise selection; she wasn’t a regular on fans’ wish lists, which often included rumored frontrunners like Kerry Washington (Scandal), Janelle Monae (Hidden Figures), and Ruby Rose (John Wick: Chapter 2).

Reynolds later tweeted a charming Photoshop of Beetz’s head on top of a comics image of Domino riding a skydiving Deadpool’s back, guns-a-blazing.

Deadpool 2 will be the first major superhero movie for Beetz, who had a breakout 2016 for her role in Donald Glover’s dramatic comedy series Atlanta, playing Van. In the X-Men franchise, she’ll be playing Domino, a frequent partner of Deadpool who first debuted in 1992 in X-Force #8. With the power to change probability and turn odds in her favor, she basically gives her enemies bad luck. In addition to annoying to Deadpool, the character is the sometimes lover of Cable, who the future son of Scott Summers (Cyclops) who debuted in an issue of The New Mutants.

Cable is another major character set to appear in Deadpool 2 but so far there hasn’t been any official casting announcement on that front. The last major rumors involve David Harbour, who played Chief Hopper from Netflix’s Stranger Things, as a popular frontrunner.

Work on Deadpool 2 is currently underway.