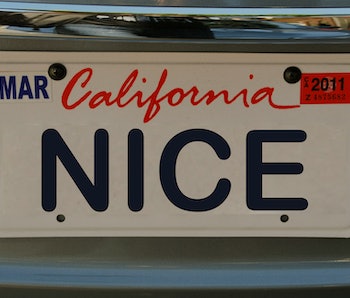 There are literally an infinite number of numbers, but everybody knows that only one of them is nice. However, the California DMV needs to remind motorists that they can’t have 69, the sex number, on their license plates, no matter how much they might want to.

“The number ‘69’ is reserved only for 1969 year model vehicles that the license plates will be placed upon,” a line on the California DMV’s website explains. The warning is literally the second sentence of a lengthy list of rules and important information drivers need to know before they order a personalized license plate.

“So the California DMV basically has ‘Stop trying to put 69 on your license plate’ at the top of the vanity plate page,” wrote Twitter user @purrgesterone, who pointed out the very prominent warning on Tuesday. Given how high-up the rule prohibiting “69” is on the website, it certainly seems like an extremely common problem for the DMV.

“The DMV does not track the number of requests for the number 69 on a license plate,” Jessica Gonzalez, the ‎assistant deputy director of communications for the California DMV, tells Inverse. Gonzalez patiently explained that state law allows the department to refuse any combination of letters or numbers on a custom plate that might be considered in poor taste. Of the approximately 7,000 plate applications the DMV receives each month, about 10 percent are flagged for further review, which seems really high when you think about it.

Some of the plate applications that the DMV has denied in the past include “ORGASEM,” “ETAMPON/,” “6GUNZ,” and the one-two combo of “1IN/STNK,” and “2IN/PINK.” A few of the denied applications are really obtuse, so props to the DMV’s examiners for identifying even the most confusing filth.

Gonzalez isn’t sure exactly when the DMV added the upfront language banning “69” from everything but vintage 1969 cars’ license plates. She suspects that the phrasing has been there from the very beginning, back when the DMV started offering online personalization service in May of 2002.

It’s unclear how many times the DMV has had to be not-nice since then.

“You would be surprised how often we get questions on this,” Gonzalez says.