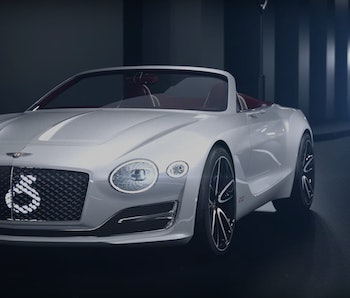 Electric cars are popular, but are they bougie? So far, luxury brands have pretty much ignored the electric market, but Bentley, the ultra-posh British automaker, just debuted a new all-electric concept that could represent an expensive new frontier.

The EXP 12 Speed 6e is Bentley’s first stab at an electric car, and it’s a pretty sight. The car is making its debut at the 2017 Geneva International Motor Show, and is intended to get Bentley customers thinking about whether they’d ever like to drop a couple hundred grand on an electric Bentley.

“It represents a first step on a journey that will change the way today’s drivers think about mobility and what it can be,” the company said in a release.

Bentley says the car can “drive from London to Paris or Milan to Monaco,” about 190 miles, on a single charge.

The exterior of the EXP 12 Speed 6e is a crisp white (a unique pearlescent English white paint, if you’re curious), and the interior is burgundy leather. There are copper accents on the car’s dials and knobs, and in the grill, which also features a light-up “6.”

Right now, electric cars like the ones Tesla makes are nice, but not quite something that James Bond would pull up in. Some high-end automakers have dabbled with all-electric supercars, but those insanely high-performance whips are sort of their own category of car. Bentley’s concept could be the first in a surge of luxury electric cars.

More like this
Gear
1 hour ago
Porsche’s Next Electric SUV Could Be an Off-Road Beast
By Jackson Chen
Gear
Feb. 2, 2023
Nissan’s Convertible EV Concept Looks Like It’s Straight Out of Tron
By Jackson Chen
Gear
Jan. 31, 2023
Why Mercedes-Benz’s Self-Driving Milestone is a Big Deal for Autonomous Cars
By Jackson Chen
LEARN SOMETHING NEW EVERY DAY.
Related Tags
Share: