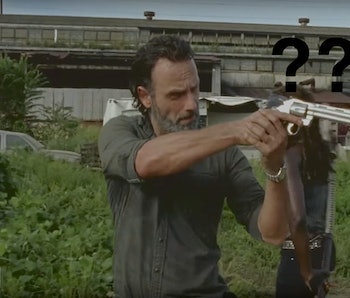 The Walking Dead was supposed to be a little bit gayer. Star Norman Reedus recently told The Mirror at The Walking dead European Tour that there were plans for his character Daryl to be gay. This comes after widespread speculation (and hopes) by many fans that the crossbow-wielding apocalypse survivor could form some sort of romantic relationship with Jesus, another character from the Hilltop settlement.

This conversation happened back in 2010 when Reedus and writer Frank Darabont were heading to an Oscar party for David O. Russell’s The Fighter, which was nominated for Best Picture. Later that year, The Walking Dead’s first season premiered in October. Reedus recounted the conversation:

“There was a time on the show where Frank was going to have me be gay, but he won’t admit it … If he admits, it’s like he’ll kill you. He referred to it as ‘prison gay,’ and I didn’t know what that meant … We were there and he said ‘What do you think if we made Daryl gay?’ and I was like ‘Let’s do it, let’s do it!”

For those that aren’t familiar, the term “prison gay” is for people who have same-sex relationships only in prison. It’s definitely a thing that happens, but it does appear a little odd that the show’s writer was interested in framing his sexuality within that context. While having Daryl be gay would’ve added to LGBTQ representation on television, in some ways it’s better off that he wasn’t tossed some prison gay backstory as a means of sensationalizing the character.

The Walking Dead television series has featured various LGBTQ characters, introducing Tara in season 4 and Aaron in Season 5. And now, fans are gearing up for Jesus to be confirmed as gay since his character is in the comic books. Tom Payne, who plays Jesus, pretty much confirmed the reveal was eventually going to happen back in an interview with The Huffington Post in November 2016.

Many fans have started shipping Daryl and Jesus together, creating fan art and fiction of the two. However, executive producer Greg Nicotero definitively said at a panel on the 2017 Walker Stalker Cruise that the two characters wouldn’t be sharing a kiss or anything. In the comics, Jesus and Aaron have a bit of a romance, but that’s yet to play out on the show. And many fans are still hoping that Carol and Daryl are endgame considering the intimate connection they’ve built throughout the show’s run.

Overall, The Walking Dead has done a fairly good job with its representation of various LGBTQ characters. Sure, there was some criticism over the death of Denise which fell into the usual tropes of gay character demises. But these survivors’ sexualities hardly matter at all after the zombies took over. There are no laws prohibiting them from getting married; there’s just survival. And it’s been great seeing these sorts of characters getting to kick ass when gay men in pop culture are often emasculated or sidelined for someone else to save the day.

While it’s unlikely that audiences will see a gay storyline for Daryl, people will hopefully be getting Jesus confirming his sexuality sooner or later, especially with the finale next week.