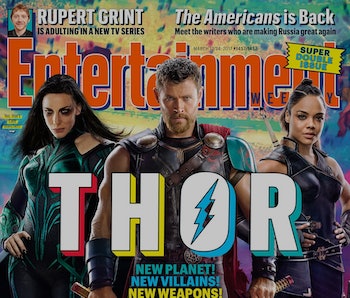 The first official photo of Taika Waititi’s Thor: Ragnarok is finally out, and in it, the mighty Thor is without both his magical hammer, Mjolnir, and his equally magical golden locks. What can this mean for the thunder god’s worthiness?

The photo, which graces the cover of the latest Entertainment Weekly, also features the first full-on look at both the film’s villain, Hela (Cate Blanchett), and Tessa Thompson’s Valkyrie.

Thor appears front and center, but his appearance suggests that things aren’t going well for him: his typically long hair has been cut short, his often close-trimmed beard is fuller than usual, and perhaps worst of all is that he’s wielding two swords rather than his beloved hammer, Mjolnir.

The cover boasts new planet, villains, weapons, and hair — delivering on three of the four. We know from the following synopsis that in the film, Thor is detained on the far-away planet of Sakaar:

Imprisoned on the other side of the universe, the mighty Thor (Chris Hemsworth) finds himself in a deadly gladiatorial contest that pits him against the Hulk (Mark Ruffalo), his former ally and fellow Avenger. Thor’s quest for survival leads him in a race against time to prevent the all-powerful Hela (Cate Blanchett) from destroying his home world and the Asgardian civilization.

You might remember that a lengthy arc from the first Thor movie left the character unable to lift his own hammer due to unworthiness. The concept was further explored a bit in Avengers: Age of Ultron and even more so in current Marvel comics. A woman, Jane Foster, now wields the hammer of Thor, while a disgraced Odinson gets drunk, fights space orcs, and spends time with his giant magical goat named Toothgnasher in The Unworthy Thor.

As for Ragnarok, we don’t know exactly why Thor is imprisoned across the universe — and how Hulk ended up there — but something serious must be is going on if he has to fight without the hammer he can usually summon to his hand with telepathy.

The haircut, though, might just be a new look. Hemsworth told EW that it “was nice not to have to sit in the makeup chair for that hour each morning.” With comedic director Waititi bringing in a much-needed tonal shift, Hemsworth said the haircut “felt like a rebirth for [him] as the actor but also as the character.”