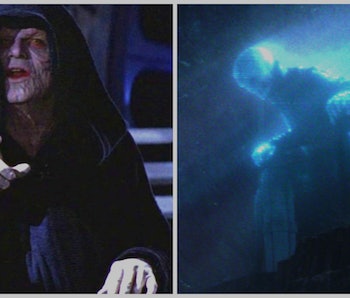 Even though Supreme Leader Snoke seemingly came out of nowhere in Star Wars: The Force Awakens, the Emperor may have known about the mysterious baddie as far back as Return of the Jedi. The latest canon novel Aftermath: Empire’s End introduced the concept of Imperial “observatories” and now, several fans think that from these observatories, the Emperor became aware of Snoke.

To be clear, Empire’s End does not specifically mention Snoke. But a character named Gallius Rax does claim that the Emperor was “convinced that something waited for him out there — some origin of the Force, some dark presence formed of malevolent substance.” As pointed out by Screenrant, one of these secret Imperial observatories was on the planet Jakku, the future home of Rey in The Force Awakens. And from these observatories, the Emperor was monitoring … something.

Dork Side of the Force postulates that the thing that the Emperor was “convinced” about was, in fact, Snoke; otherwise, taking the trouble to mention it in a canon Star Wars novel seems silly. For better or for worse, all the new novels, comics, and animated series do count as part of Star Wars canon, meaning, if this is a sly Snoke reference in Empire’s End, then Snoke is somehow mixed up in events on the planet Jakku, which suddenly might make many of us start to wonder if Rey is more connected to Snoke after all.

Will The Last Jedi make references of Palpatine’s observatories? It’s possible. If Leia and Han knew about Snoke in The Force Awakens, then somebody as savvy as the Emperor probably was able to foresee the rise of Snoke, too.