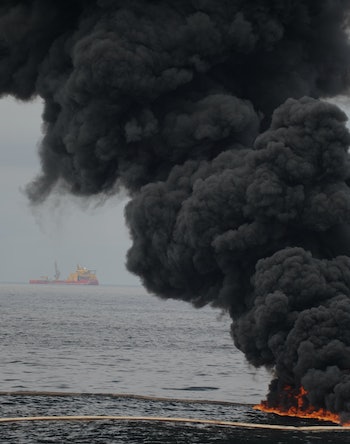 A super absorbent sponge may be about to radically change our approach to cleaning up oil spills. After eating 90 times its own body weight in oil, the sponge can be wrung out and reused again. In addition to potentially being the most effective method of oil-cleanup yet, it’s the first to directly suck up oil below the visible slick on the surface.

The foam is composed of polyamide plastics treated with silane molecules that, in the right proportions, seek out oil and soak it right up. The material is the brainchild of University of Chicago scientist Seth Darling, who developed the underlying technology system known as sequential infiltration synthesis.

Darling first created SIS about seven years ago, but without any particular application in mind — more or less just for the sake of the science. Then, two years ago, the idea occurred that this technology could be used to create a better technique for oil-spill cleanup. As it happened, the United States Coast Guard was casting about for someone to do exactly that.

“It was just one of these strokes of serendipity,” Darling tells Inverse. “Our lab found out and we said, ‘wow, let’s go for it.’”

Testing the foam involved two phases. The first was laboratory-scale, working with one-inch cubes in beakers. The second phase had to demonstrate not only that the sponge could be used on a large scale, but that it also could clean oil from inside the water column, something Darling believes his product is the first to do.

You probably picture oil spills the way you’re accustomed to seeing them in the news — broad slicks across the water’s surface. Until recently, that’s how clean-up crews thought of them, too. But since the Deepwater Horizon spill in 2010, people are increasingly realizing that, despite the common refrain about oil and water not mixing, a spill can actually leave a massive volume of oil under the surface in droplet or dissolved form, where it can wreak havoc on the ecosystem. This oil — the stuff in the water column — is what the Coast Guard was looking to tackle.

“There just aren’t solutions for that, there’s nothing on the market that addresses that,” Darling says. “It’s just a fundamentally different problem. I’m sure there will be other great ideas, but no one really even thought of this problem before recently.”

So uncharted is this territory that it took a while for the Coast Guard to figure out how to even simulate the right conditions. Along with the Bureau of Safety and Environmental Enforcement, they operate a facility on a naval base in New Jersey where they hold training and testing for oil-spill response — a tank the length of two football fields, holding one million gallons of sea water.

“Of all the places in the world, that’s where you go to do this kind of thing,” Darling says. “But they usually just deal with slicks, not the water column.”

Eventually everyone got the variables right; oil can enter the water column in a couple of different ways. If it begins as a surface slick, the lighter components of crude oil — which is made up of dozens of different chemicals — will evaporate, leaving the heavier ones to drop down in a process known as “weathering.” Wave action can also break up the slick over time. As with Deepwater Horizon, some spills start beneath the surface. Oil spewing out of a crack is more likely to stay within the water column as opposed to floating up.

The obvious problem of surface oil still needs to be addressed. There are a number of solutions already in practice, though none of them are really without their problems. You can skim it; you can burn it. You can dump chemical dispersants over it from something akin to a crop duster, intentionally breaking it up so it sinks down into the water column, where it will remain obediently out of sight, out of mind, until someone like Darling remembers that that shit still needs to be cleaned up, too.

Darling and his colleagues began testing the foam at the New Jersey site in mid-December 2016. Using an eight-by-eight frame paneled with squares of material, they compared their product to other absorbents, including commercial ones already on the market. No one had tried to do this before, so there was no existing benchmark for knowing how their effort would stack up.

After what sounds like an extremely cold week outdoors, they found that the foam was superior and effective not only with different types of crude oil, but with diesel fuel, which is more refined and basically an entirely different beast with its own distinct chemical and physical properties. They reused the same set of pads for the whole experiment; they can seemingly be used hundreds of times.

“There’s More Science to Do”

Darling and his team aren’t affiliated with any oil-response contractor, so before this can be scaled up to the actual ocean they need a commercial partner to do the manufacturing. But the vision Darling has clearly in his mind is of a massive net, like what you’d see being pulled behind a commercial fishing trawler. But instead of rope or wire, it’s absorbent foam, and instead of fish being pulled up on the winch, it’s oil, to be squeezed out before the net goes back down again.

“There’s more science to do to make it better and adapt the technology to address other pollutants, too,” Darling says. “With water — the universal solvent — you can get just about anything into it, all kinds of things that cause trouble. We’ve got some ideas about other particularly problematic pollutants. Stay tuned, I guess.”

Disasters on the scale of the Exxon Valdez and Deepwater Horizon serve as harrowing reminders of the devastating effects uncontrolled oil spills have on the environment. Skimming, burning, and dispersing oil are only partially effective and carry their own ecological impacts. An enticing alternative strategy involves oil sorbents capable of efficient extraction of oil from water bodies, which in turn necessitates the design and implementation of novel materials Here, we extend methods of sequential infiltration synthesis (SIS) traditionally only applied to nanometer scale thin films to create oil sorbents based on macroscopic, commercially available polymeric foams. Targeting superoleophilic and superhydrophobic chemistries, we demonstrate the propensity of SIS-based modifications in oil spill remediation and demonstrate its efficacy in crude oil sorption in model seawater. We find crude oil sorption on the order of 30 and 90 times the initial foam weight for polyurethane and polyimide, respectively, both with highly favorable reusability.