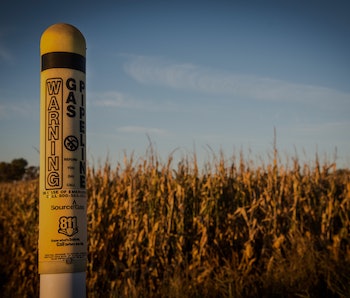 On Monday, TransCanada Corp announced that it had shut down a section of its Keystone oil pipeline in South Dakota after it found a small leak a few miles from a pumping station.

The South Dakota leak is, at the moment, being reported as a relatively minor spill, with little environmental impact. According to CNN, only about 187 gallons of oil leaked from the pipe, about four and half barrels worth (a standard barrel holds 43 gallons). Initial figures for oil spills often underestimate the size of the mess, so that number could rise over the next few days. While the spill seems small, it’s just another symptom of a much larger epidemic of oil spills across the country.

Opposition to oil pipelines like the proposed Keystone XL pipeline usually centers around the fact that major pipeline spills are catastrophically harmful to the environment and dangerous to people living in surrounding areas. Still, oil pipelines are 70 times safer than transporting crude oil on trucks, according to a Propublica investigation. The problem is when oil pipelines blow, they tend to blow big — and it still happens a hell of a lot. This video, made in 2013, shows nearly 8,000 incidents of pipelines leaking or bursting, causing over 500 deaths, 2,300 injuries, and almost $7 billion in damage according to the Center for Biological Diversity.

It’s still unclear what caused the South Dakota spill. Statistically, the two largest causes of oil pipeline incidents are excavation damage (someone busting the pipe while digging with heavy machinery) and corrosion, followed narrowly by welding or other equipment failure (valves left open, shoddy welding on the pipe, human error).

“Tick, tick, tick,” Robert Bea, a professor emeritus in civil engineering at the University of California, Berkeley, told the Chicago Tribune after a major oil spill near Santa Barbara, California “Things get older. They don’t get stronger.”

Essentially, oil companies are working against a huge number of variables to keep highly-pressurized oil inside of thin steel tubes buried underground.

A small leak seems more likely to be caused by corrosion or a faulty weld than excavation damage, which would certainly have been reported by now. But at those pressures, the wrong spot of rust or corrosion could still be devastating, so if the spill is contained at just a few barrels, South Dakotans got off easily.