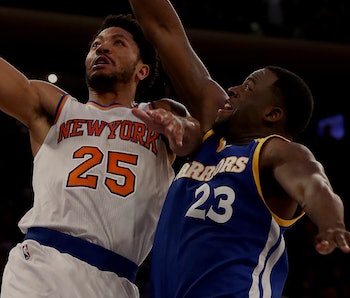 Madison Square Garden, home of the New York Knicks, attempted to pull off an old-school experiment on Sunday night: For the first half in the home team’s battle against the Golden State Warriors, there was no music, video, or in-game entertainment — just like the old days of basketball. The purpose of this experiment was to present basketball “in its purest form.” Instead, NBA fans got a crash course in understanding the powerful psychological influence that music has on athletes.

Some players keenly felt the silence. “That was pathetic,” said Warriors power forward Draymond Green, commenting on the lack of sound during the game. “It changed the flow of the game. It changed everything.” Later, he also said that music brings rhythm into the game and helps players “get into a certain area.” All those elements make a difference in the game, he explained, and without them, the entire game was thrown off. Golden State head coach Steve Kerr and Knicks center Kristaps Porzingis also said they didn’t like the lack of sound in post-game interviews. Kerr said the game felt more like being in a church than in a stadium.

Science backs up Green’s theories: A 2011 review of two decades of music psychology studies found that upbeat, receptive music reduced an individual’s perception of fatigue and increased their work output. In turn, these effects resulted in higher-than-expected levels of endurance, power, productivity, or strength. Music, the researchers write in the International Review of Sport and Exercise Psychology, can be thought of “as a type of legal performance-enhancing drug” — a factor that triggers both a positive emotional and physiological response.

Why music — particularly fast-tempo music — can help improve player performance isn’t understood entirely, but there are some theories. One idea is that sensory input, like music, can hinder the physiological feedback signals sent by the body when an individual works out. This means that a person playing basketball will feel fatigue but will have a more positive outlook on that fatigue. Another theory corroborates Green’s ideas about the importance of rhythm. Studies have found that music activates neural structures that influence rhythmical movement in the limbic and reticular activating systems. They suggest that players may subconsciously get a rhythmic boost from the sounds that play overhead.

The absence of sound in the first half of the game may have affected the Knicks’ home court advantage, too. Research has suggested that a less engaged crowd means less engaged players — and music is thought to be an essential way of capturing the attention of audience members, raising their spirits, and regulating their mood. Additionally, music can trigger and recreate the emotions associated with old memories. If a person is used to the rhythm of clap clap clap clap let’s go during an exciting game, they’ll likely feel the emotion void when they are met with no stimulus during a silent game.

Music may have a particularly strong influence on basketball players: A 2008 study published in the Journal of Applied Sport and Psychology found that players who had previously listened to catchy, upbeat music choked less on free throws. The researchers theorized that this occurs because music distracts players from the pressure of the immediate situation, helping them concentrate on what their body is trained to do instead of all the other external forces. In the first half of the Knicks-Warriors game, the players didn’t have the convenience of stadium sounds to get them into a flow — a situation that got them way into their own heads.

More like this
Science
Jan. 28, 2023
How does the placebo effect take hold? A doctor explains two influential factors
By Kathryn T. Hall. and The Reader
Mind and Body
Jan. 21, 2023
Procrastination study suggests a link to shoulder pain, bad sleep, and more
By Eva Skillgate, Alexander Rozental, Fred Johansson and The Conversation
Science
Feb. 4, 2023
Astronomers May Be on the Cusp of a “Potentially Revolutionary” Cosmological Breakthrough
By Universe Today and Matt Williams
LEARN SOMETHING NEW EVERY DAY.
Related Tags
Share: