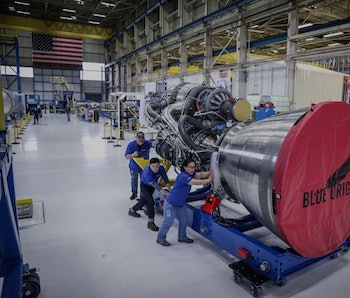 On Monday, Jeff Bezos took a moment to brag a little. It wasn’t about Amazon Studios’ Oscar wins or about technology being used by his massive retail empire. It was about Blue Origin, his Kent, Washington-based aerospace company. With two photos, Bezos showed off the first-ever BE-4 rocket engine, which the Blue Origin is making to relieve U.S. spaceflight parties from having to depend on Russia-made RD-180 engines for rockets jetting off into orbit.

The photos come just as Blue Origin is expected to make big announcements this week about its intentions for space travel, industry officials told The Wall Street Journal.

Blue Origin has been working on the BE-4 for quite some time. The company had initially hoped to shoot for a test flight by 2017; it’s unclear now whether that’s feasible, given that the BE-4 will still need to undergo a series of ground tests first. However, the company looks like it should be ready to use the new engine for commercial flights by 2019, as planned.

Bezos also mentioned that two more fully assembled BE-4 engines should be ready soon. It’s still unclear where the engine is headed after leaving Washington.

Blue Origin’s newest rocket in development, New Glenn, is designed to use seven different BE-4 engines. Like its predecessor, New Glenn will be a reusable rocket, but it will powerful enough to take payloads and crew farther off into greater distances within Earth’s orbit.

Bezos isn’t the only person happy with Monday’s development. Tony Bruno, CEO of United Launch Alliance, tweeted out positive sentiments as well. ULA plans to use the BE-4 engine as part of its new Vulcan rocket, the successor to the Atlas V.

Although SpaceX managed to snag the space spotlight last week with the announcement of a crewed mission around the moon, it’s worth remembering there is plenty of exciting work being made by the other major players in the industry.

More like this
Innovation
15 hours ago
Boeing Starliner OFT-2 launch date, specs, and timeline for the ISS flight
By Harry Stoltz
Science
18 hours ago
70 years ago, the world united for a monumental scientific project — and kicked off the Space Race
By Doris Elín Urrutia
Innovation
5.6.2022 12:00 PM
NASA wet dress rehearsal woes set back launch date of Moon mega-rocket
By Doris Elín Urrutia
Share: