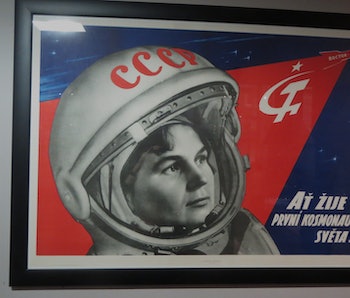 Russian cosmonaut Valentina Tereshkova, the first woman to ever fly into space, celebrated her 80th birthday on Monday. Unless you’re a space buff with a keen interest in Soviet space history, Tereshkova’s name is probably unknown to you. Nevertheless, her groundbreaking 1963 flight into space was decades ahead of Sally Ride on the American side — and her career since is highlighted by an active role to advance the presence of women in spaceflight and promote space travel to more audacious heights.

Born on March 6, 1937 to a father who was a farmer and a mother who worked as a textile factory worker, Tereshkova’s interest in space began very early in her youth — well before human spaceflight seemed like a realistic endeavor. She became an avid parachutist and began skydiving at the age of 22, which led to her selection as a cosmonaut. Tereshkova wrote to the Soviet authorities volunteering to take part in any training program for female cosmonauts, and she soon became one of only five women accepted for cosmonaut training.

On June 16, 1963, at the age of 26, Tereshkova became the first woman to ever fly into space on the Vostok 6 mission, being chosen out of 400 applicants as the pilot for the mission.

Major General Nikolai Kamanin, the official in charge of cosmonaut training, wrote in his diary, “she is active in society, is especially pleasing in appearance, makes use of her great authority among everyone who she knows…We must first send Tereshkova into space.”

As part of Vostok 6, Tereshkova completed 48 orbits around Earth over the course of three days. On the spacecraft, she also conducted experiments, took photos and footage, and monitored the devices tracking her body and the capsule.

The spacecraft’s automatic navigation software had an error though, causing the Vostok 6 to move away from Earth. Fortunately, Tereshkova corrected this and developed a new landing algorithm to land safely on Earth.

“Anyone who has spent any time in space will love it for the rest of their lives,” Tereshkova said. “I achieved my childhood dream of the sky.”

Despite her accomplishment of flying in space, some of the media coverage about Tereshkova was steeped in sexism. One LIFE magazine article referred to her as a “blue-eyed blonde with a new hairdo” in a piece titled “She Orbits Over the Sex Barrier.” Male scientists also looked down on her.

“She was so hysterical that she threw up in space,” Soviet scientists said. “At the last minute, she panicked, and they had to strap her into her seat against her will.”

The American side of space was hardly better. John Glenn, the first American astronaut to orbit Earth, once said, “so far we felt the qualifications we were looking for…were best taken care of by men.”

After Tereshkova’s flight, Soviet authorities thought it was too dangerous to send more female cosmonauts into space. But Tereshkova did not take this sexism in silence. She and other female cosmonauts wrote to the central communist party committee to protest this decision.

Tereshkova never flew in space again, but she inspired women around the world. Sally Ride, 20 years later, became the first female American astronaut in space, flying up into orbit aboard the Space Shuttle Challenger. When journalists questioned whether Ride’s body was fit enough for spaceflight, Tereshkova publicly rebuked these sexist comments.

By the time Tereshkova retired in 1997, she was honorarily inducted into the Air Force, obtained the rank of Major General, and received the Joliot-Curie Gold Medal of Peace for her work with the World Peace Council.

Today, she serves in the State Duma within the Russian legislature. But she’d go back into space in a heartbeat, if the opportunity ever arose. Close to her 70th birthday, Tereshkova said she’d be down to lead a one-way trip to Mars.

“If I had money, I would enjoy flying to Mars,” Tereshkova said. “This was the dream of the first cosmonauts. I wish I could realize it! I am ready to fly without coming back.”

A decade later, a mission to Mars has moved from the realm of possibility to probability. Perhaps Elon Musk and SpaceX might give Tereshkova an actual shot at seeing the red planet someday soon.