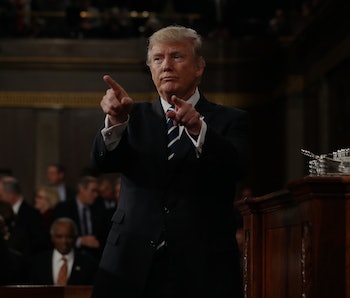 Last month, a group of prominent veteran Republican statesmen met with White House officials to present a simple proposal: place a $40 per ton carbon tax on fossil fuels burned in the United States.

For anyone just tuning in, it was a shocking, unprecedented moment. But policy wonks were less surprised at what might seem on the surface as a blatantly liberal policy, but putting a price on carbon makes for solid Republican policy.

“Conservatives who take climate change seriously recognize that other policies, like command and control regulations and subsidies, probably aren’t going to work and are going to be very expensive, and the more efficient way to address climate change is through a carbon tax,” Gary Lucas, a law professor at Texas A&M University, tells Inverse.

Ignoring the evidence that climate change is real and dangerous is becoming untenable except in the most ideological conservative circles. And of all the ways a government could tackle greenhouse gas emissions, putting a price on carbon is the one that even oil company executives can get on board with — it’s relatively cheap, simple, predictable, and effective.

But how do you convince Donald Trump, who declared climate change a hoax and promised to back out of the Paris Agreement, to adopt a comprehensive policy on fighting global warming? The answer, maybe, is that you tell him how it will pay for that wall he wants to build along the U.S.-Mexico border.

“In exchange for infrastructure spending, which tends to be popular, and in exchange for cuts to the income tax and the corporate tax, which tend to be popular particularly among conservatives, we would adopt a carbon tax to pay for those things,” says Lucas, “as opposed to, say, exploding the deficit.”

It’s a Hail Mary, sure. But politics are unpredictable. And a carbon price is probably, in the long run, inevitable.

“I think sooner or later, there will be a price on carbon,” says Jerry Taylor, president of the Niskanen Center, a libertarian think tank in Washington, D.C. “Whether that’s through a national cap and trade regime or a carbon tax remains to be seen. I suspect that a carbon tax is the most likely policy vehicle in the United States for carbon pricing primarily because it will require Republican buy-in for carbon pricing to happen, and — for better or worse — cap and trade is now associated with the Democratic Party.”

For Republicans, the time to act is now, while the ball is in their court, says Taylor. “If Republicans conclude that carbon taxation, or at least some form of carbon pricing, is superior to an endless barrage of EPA regulation, there is really no time like the present to make that deal, because Republicans hold more political cards right now.”

“Could we see a carbon tax? Possibly,” he continues. “I’m not predicting it, but it’s a window of opportunity. The same goes for how we pay for infrastructure. What happens if the Republican Party makes a run at regulatory authority under the Clean Air Act or the Endangerment Finding at EPA, and they fall short? Well, then they may have an incentive to make a grand bargain simply because if they lose the White House — and some day they will lose the White House — then the incoming Democratic administration will be rewinding the clock right back to where it was in the Obama administration, with the full power of regulatory authority to enact an agenda that Republicans probably won’t like.”

Did the proposal from Republican elder statesmen move the needle in Washington? It certainly strengthened the position for a conservative carbon tax, though Taylor’s not convinced it generated new converts to the cause. Still, the rumblings of Republican-led climate action have begun.

“I can tell you that a number of Republicans that publicly profess agnosticism or arguments that things are too unclear for policy, there are a number of them that privately will tell you a different story, that they appreciate that climate change is happening,” says Taylor. “[It’s] largely driven by industrial emissions, and it’s an important risk that we need to address. Even when they are more or less supportive of carbon taxation as the ideal policy response in private, how you get there politically is not an obvious matter for Republicans.”

Democrats, for their part, might be wise to speak loudly about all the command and control regulations they’d like to see when they’re back in power, and avoid associating themselves with any carbon pricing proposals. In exchange for letting Republicans play the heroes in this drama, they just might end up saving the planet.