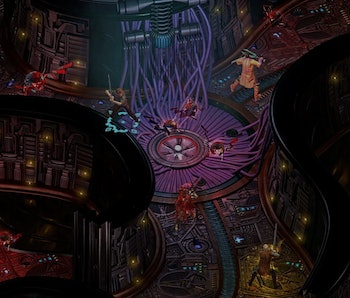 The long-awaited Torment: Tides of Numenera is finally here. A spiritual successor to one of the PC’s best classic RPGs, Planescape: Torment, it fast forwards a couple billion years into earth’s future, where humanity now dwells in the ruins of the technologically advanced civilizations that came before. People now use the remnants of this tech, though no one has any real understanding of how they work — it’s essentially magic to the people of the present day. It makes for a unique RPG setting, for sure, but that’s not the only thing different about Tides of Numenera. This text-heavy adventure can also be played without engaging in any combat. Why would anyone do such a thing? Well, there are quite a few good reasons, it turns out.

It leads you down unexpected paths

Avoiding combat in Torment can have some unexpected consequences, both in the present and in the future as you draw to the game’s conclusion. People will remember you for good deeds or any ill-will turned towards them. It’s always exciting to see how something you did early on in the game will come back to reward you or, depending on your character, haunt you.

It can be just as challenging

Torment: Tides of Numenera abandons the tired good vs. evil dialogue options that often plague video games. You have to truly think about how the person you’re talking to might respond to whatever it is you’re saying. That means taking into account the subject’s personality and history to figure out the best way to navigate a social interaction. That can be trickier than it seems, but when you pull it off you’ll feel like a certified diplomat.

This plays into how you design your character, too. Depending on the skills you invest in, navigating conversations can be easier or harder. Certain skills will allow windows into a person’s thoughts or make you more convincing. Successfully winning someone over requires a bit more than choosing what you think the default “good” option might be.

On top of all of that, you’ll have to consider the Tides. Your decisions align with different Tides. Blue, for example, represents wisdom, while red may represent rashness, action, or passion. How you align yourself also affects how you may respond to different scenarios.

It’s great for people who like playing the bad guy, too

If you’re one of those people who treats video games as twisted social experiments, you’ll find great satisfaction in avoiding combat, too. It’s not just the kind who are the champions of old-fashioned discourse. Villains also happen to be good at it.

There are many delicious ways to manipulate your way to success or completely deceive unwary victims. Rather than aggressively pursuing fisticuffs at every opportunity, think about how you can turn a situation to your advantage while keeping your competition down. It’s not entirely obvious at first, but Torment is fully accommodating of more wily forms of play should you seek them out.

You may come into Torment: Tides of Numenera expecting a full turn-based RPG. While that is the case, this is a game that largely revels in its writing more than anything else, and combat instances are relatively rare, whether you want them or not. The game truly shines in its bizarre fiction and fascinating world-building.

Taking the time to explore the world of Torment through the many story branches the game presents to you is the most rewarding way to play. By speaking to everyone, and finding ways to solve a problem without resorting to violence, you’ll be able to learn more and see more.