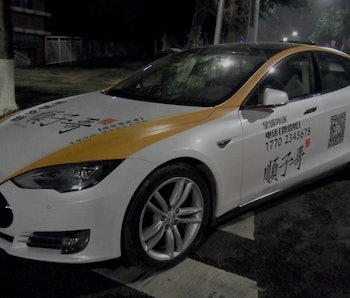 Tesla is about to take advantage of the China’s electric car revolution. In the company’s annual earnings report released Wednesday, Tesla confirmed it made $1 billion in revenue from China alone, accounting for over 15 percent of total revenue and tripling the previous year’s figure.

That’s great news for Elon Musk’s company, considering that electric cars are expected to take off in a big way in the country. China is currently working toward the goal of achieving five million electric vehicles on the roads by 2020. Last month, the government announced plans to build 800,000 charging points over the next year, and 100,000 of those are expected to be public access. This would increase the number of public charging points to 250,000. China also wants to transition every Beijing taxi onto electric power.

Tesla hasn’t always been successful. When the company first launched in China in 2014, it was hampered by slow deliveries and fears that there wouldn’t be enough chargers available. The company introduced a converter so consumers could use government-run charging points, and underwent a major strategic rethink in 2015 that involved new China-focused options. Tesla introduced optional premium rear seats, for example, due to large demand from wealthy Chinese buyers who had personal chauffeur.

Tesla faces some big challenges if it wants to remain competitive, though. For example, China is a similar size to the United States but has far fewer superchargers. The company claims its proprietary superchargers are the only chargers capable of juicing up vehicles at 120 kilowatts, which gives the cars 170 extra miles of range for just an extra half hour of charging. According to Tesla’s website, there are 114 supercharger stations in China, comprising just 14 percent of all global supercharger stations.

It might not sound like a big deal, but these superchargers are part of the added value that comes from choosing a Tesla over a cheaper vehicle. Chinese electric cars like the Chery eQ achieve a far shorter range of 124 miles, but they’re also a lot cheaper at $8,600 after subsidies. Sure, the Model X can reach up to 289 miles, but if you don’t live near a supercharger you might decide the added range isn’t worth paying the premium. Elon Musk’s company may have seen major boosts in its revenue last year, but the story isn’t over just yet.