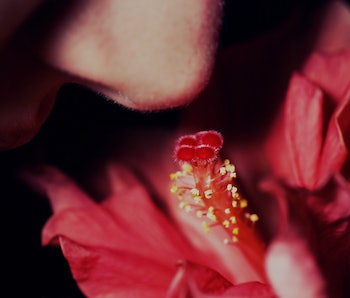 Pablo Meyer never meant to study the mysteries of smell; he’s actually a trained physicist whose Ph.D. focused on circadian clocks, the internal sense of time that dictates sleeping schedules. But Meyer — a genetics professor at Mount Sinai’s Icahn School of Medicine and a researcher with IBM’s DREAM challenge, which attempts to reverse engineer biological conundrums for practical everyday solutions — has long been fascinated by how molecules inform behavior, and vice versa.

Meyer is lead author of a recent study published in Science that has reverse engineered smell to potentially change how we interact with it. “Olfaction was a big mystery,” Meyer said. People, he tells Inverse, understand smell to be singular, something everyone understands as the same. But the fact is that our sense of smell — last cataloged in 1982 in a database of scents called The Atlas of Odor Character Profiles — is hugely influenced by our family, culture, and environment.

“Olfaction is one of those things that we ignored,” Meyer rues, saying it’s often cast aside as a simplistic sense. “We have five senses, but others are classified as more important, like sight.”

Before the study led by Meyer, our understanding of smell was elementary at best. We knew that certain smells elicited nearly universal reactions: The scent of decay came with waves of disgust, the scent of garlic was associated with food, flowers had a pleasant perfume connection. But understanding how humans reacted to certain scents was a mystery.

Meyer and his team sought to elucidate our sense of smell by revisiting the nearly 40-year-old smell dataset with 49 individuals. The previous study asked participants to choose from about 120 words when describing smells, but to Meyer and his colleagues, that was overly complex and “had too many dimensions, too much space [for interpretation].” They settled instead on a little more than 20.

Meyer and his team collected the participants in a very aughts way — through Craigslist. Meyer said this was important in ensuring that the people who participated in creating a new catalog of smell existed across a socioeconomic spectrum, representing different races and ages. This was key because smell is not only something that is different across environments and throughout age, but also has different associations for people of different cultural backgrounds. “We were treating humans as black boxes,” Meyer said.

After rigorous statistical analysis, some clear patterns emerged: “Garlic and fish were the easiest [scents] to predict,” Meyer noted, noting that the strong aromas of each were simple on a molecular level, thereby making recognition of them a simpler task. There were also relatively universal reactions to a “decayed” scent, which was deemed unpleasant, a “urinous” scent that brought to mind the word “acid,” and a sweet aroma that made people think of bakeries.

But we’re still in early days of understanding how people react to scents — and there are a lot of people who want to know. “Think about the food industry,” Meyer says. So much of food relies on the close interplay between smell and taste. On the practical side, the smell of products that many people avoid — cleaning products from sprays to toothpastes to pills that are bitter to swallow — could be adjusted to give off a very different impression. Or think of picky eaters, or those suffering from amnosia (the total or partial loss of smell), or people in space or in airplanes (where taste and smell can be distorted) — figuring out how smell really works could be a game changer for them.

Meyer recognizes the possibility of a future where smells are used systematically to influence behavior in countless ways. For now, though, he says his research remains firmly in the realm of theory. Smell, after all, isn’t just about how an aroma or stink wafts through the air, Meyer reminds us: “It’s more complex than if you smell garlic or not. It’s about how you perceive odors.”