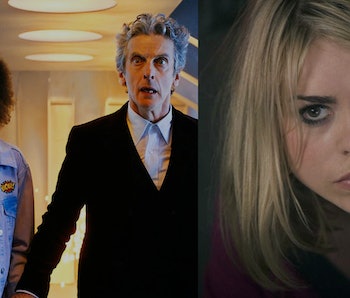 The Doctor’s new companion, Bill, has promised she’s happy to stay with Doctor Who’s titular Time Lord, even if it kills her. Bill’s (Pearl Mackie) “New Companion Trailer,” which premiered February 25, shows Bill in awe of the Doctor, as most are upon meeting him.

The trailer’s dialogue has some Who fans worried that Mackie will only get one season aboard the TARDIS. But it’s doubtful that her story will end in sync with the 12th Doctor’s when Peter Capaldi departs the show — and here’s why.

It’s easy to argue that Chris Chibnall will be looking to completely revamp Doctor Who when he takes the reins from Steven Moffat for Season 11, but is that really the best option? A complete change-up of Doctor, companion, and showrunner happened in 2010 when Matt Smith’s 11th Doctor and Karen Gillan’s Amy Pond were aligned with the beginning of Moffat’s tenure. The departure worked, arguably, rather well, and Doctor Who saw a surge in popularity that has since then slowly declined. That lost popularity is why rumors of a younger Doctor have been so popular — Who lost its sex appeal with Smith’s departure, and now it wants it back.

But giving Mackie a single season before ripping her away from the audience’s grasp would be cruel and unusual punishment considering that she could be the next Rose Tyler.

Think about it: She works in a shop, she’s a little rough around the edges, and she’s in awe of the Doctor but will undoubtedly take zero shit from him at the end of the day. Moffat will have been running Doctor Who for seven years upon his departure, and while most Who fans seem more than ready for the change-up, this big a shift can be jarring for such an established series. Using Bill as a way to soften the blow would be not only smart on Chibnall’s part but a wonderful experience for fans as well.

Rose is, to this day, undoubtedly the most popular Doctor Who companion, and a lot of that has to do with her complicated relationship with two very different Doctors. Since the show is looking to change things up with a new, possibly younger (and sexier) Doctor — similar to the change between Christopher Eccleston and David Tennant back in the day — using Bill as a Rose of sorts to bind the two Doctors together and flesh out a realistic dynamic would be helpful to writers and fans alike.

More like this
Entertainment
8.1.2022 2:00 AM
Westworld Season 4 just copied one of the best Doctor Who episodes ever
By Ryan Britt
Entertainment
7.27.2022 4:15 PM
Everything we know about Rick and Morty Season 6
By Corey Plante
Entertainment
7.24.2022 1:30 PM
Stranger Things Easter Egg reveals an unnerving hidden Vecna power
By Dais Johnston
Related Tags
Share: