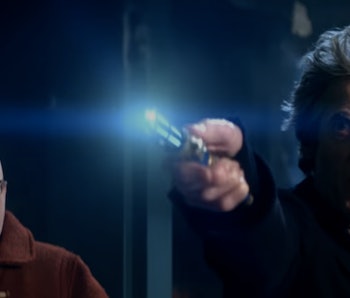 Bill, the newest human companion in the TARDIS, says the Doctor is “the most dangerous man in the universe” in the latest trailer for Doctor Who Season 10. But will this exact scene — like a previous trailer — actually make it into the show? While Capaldi is badass here — and Bill is charming — this new trailer plays like an impressionistic version of the new season in its entirety rather than a preview of one specific scene.

As Bill, Nardole, and the Doctor walk down the hallway of a gothic-looking library, Bill narrates and tells the audience how funny, scary, and badass the Doctor is. For fans, this isn’t news, but as the trio walks in slow-motion, the Doctor brandishes his sonic screwdriver and causes various lighted spheres to explode. And if you look closely enough, at least one these spheres contains what looks like various well-known adversaries from throughout the series. Where those the eyes of Missy? By the time everybody reaches the end of the hallway, this motif is confirmed: an undulating ghostly blue mass of different monster faces, including at least one Ice Warrior and a few reptilian Silurians surge at the heroes. Will this scene actually happen in the show? Have the ghosts of all the Doctor’s villains teamed up to haunt a library?

Like the trailer that introduced Bill as the new companion, it seems unlikely this scene will actually take place in the new season. Instead, watching the Doctor fire off crackling lightning bolts at his foes feels metaphoric. In fact, this same hodgepodge-of-villains approach was used when Matt Smith and Karen Gillan were introduced as the Doctor and new companion, respectively, back in 2010. Back then, some of the Doctors famous villains were briefly glimpsed in a kind of underground vortex situation, too.

Just as Amy Pond and the Doctor never dealt with that underground bad-guy gauntlet, it seems unlikely that the Doctor and Bill will end up in this new haunted library, but you never know.