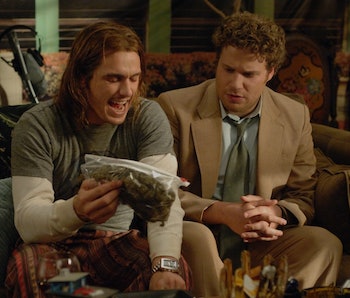 The era of shady, low-profit, back-alley weed dealing is over: As marijuana legalization is cautiously rolled out across America, weed professionals are laying the groundwork for a sprawling and legitimate cannabis industry. But it needs humans to work. Right now, marijuana sales are poised to top $20.2 billion by 2020, and there are about 120,000 legal jobs that already exist in the industry. That number is only going to grow as legal cannabis gains traction.

The burgeoning field, which boasts a median salary of about $57,000, requires experts from all walks of life. The fact that the industry is so young means that there’s plenty of room for beginners to move up. While there will always be bud to tend and plants to water, the cannabis industry’s legitimacy has opened up thousands of what industry insiders call “ancillary” jobs — those that support the production and sale of weed-related businesses. But which of these can make us rich? To find out, Inverse interviewed a trio of successful cannabis entrepreneurs. Here are the career paths they suggest the modern, profit-chasing weed dealer should consider.

While marijuana-friendly state laws ease the path towards starting your very own cannabis business, entrepreneurs taking the DIY route will wind up in paperwork hell, Frank Lane, CEO of the cannabis media company CFN Media, tells Inverse. There’s very little precedent for large-scale enterprise in this industry, which is why consultants who have gained the necessary experience in other fields are in high demand. Experts educated in business law can help navigate legal weed’s complicated (and expensive) licensing procedures, while those with entrepreneurial experience and familiarity with industry norms can guide business owners through the process of setting up a business or even purchasing an existing dispensary, Lane adds.

While owning your own business can be prohibitively expensive (more on that later), there’s plenty of money to be made in managing someone else’s business. In an interview with Inverse, Derek Peterson, the CEO of Terra Tech, the first publicly traded cannabis company in the United States, says that big business owners are in need of people who can organize staff and set schedules. While these may not seem like skills that could earn you a lot of money, Peterson says there’s a “premium” on people with retail experience right now because “there isn’t a talent pool”. That’s not the only reason they’re willing to pay up: Cannabis professionals want to “show face to other industries,” Peterson says, explaining that offering competitive salaries ranging from $50,000 to $100,000 gives the entire cannabis industry a sense of legitimacy.

Modern industries can’t survive without the internet and a smartphone, and cannabis is no exception. Companies like MJ Freeway and Biotrack THC — which produce licensing software for businesses to process their marijuana sales — are indispensable to anyone in the supply chain, Lane says.

They’re not, however, immune to hackers, as a recent attack on MJ Freeway revealed. In fact, marijuana-focused cybersecurity is a growing sub-industry that is looking for experts.

As in all businesses, the customer is key, as Neil Demers, the CEO of high-end cannabis company and brand Diego Pellicer, pointed out in an interview with Inverse. “In my personal opinion, I have not seen that many good apps,” he says, referring to programs that make the experience of buying weed seamless and convenient. As going to a dispensary is still uncomfortable for some people, app developers could play a crucial role in shaping the American weed industry going forward.

As marijuana extracts like waxes and shatters become more popular — and demand will for sure grow as new medical applications are discovered — anyone trying to run a scientific, pharmaceutical-grade extraction business will need experts in cannabis oil extraction, says Peterson. This isn’t an easy process: It involves using either liquified carbon dioxide or volatile petroleum solvents such as butane, hexane, or propane, which can explode if handled improperly. There aren’t a lot of people with this scientific expertise, Peterson says, so business owners will probably be willing to pay up for specialists.

Of course, there’s always going to be room for people who are familiar with the plant itself: The head grower of a large cultivation facility, Peterson says, can earn up to “six figures” if they know what they’re doing. This job, however, can be challenging: Growing a couple of hydroponic plants in your apartment’s back room isn’t the same as managing thousands of square feet of marijuana farmland. A good grower will have to not only be familiar with cultivation but also be able to keep up with the rapidly changing scientific and technologic standards being applied to marijuana’s lighting, irrigation, and harvesting processes as growers scale way, way up.