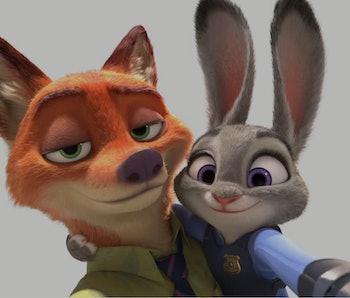 While nobody mentioned furries during the awards ceremony, a very vocal online contingent of furries embraced the win as their own.

Furries, of course, are people who either identify as half-animal or simply enjoy the fantasy of being able to live as anthropomorphized animals.

Many furries identify with Zootopia because the film stresses that anyone, if they simply wish hard enough, can overcome their background or perceived “nature” to become something more. That, and the film follows a sensual, flirtatious fox. Though the “follow your heart” mantra is a pretty typical Disney moral, the fact that Zootopia portrayed it solely by telling the stories of anthropomorphized animals who were aware of both their humanity and their respective wild species made it extremely attractive to an often-mocked subculture.

As for Disney, the company reached out to furry meet-up groups when promoting its film, promising furries that they would live peacefully and happily in the film’s imagined world. Even aside from Disney’s targeted marketing, Zootopia was an instant hit among furries, inspiring both childlike and explicit furry fan art as soon as concept art hit the internet.