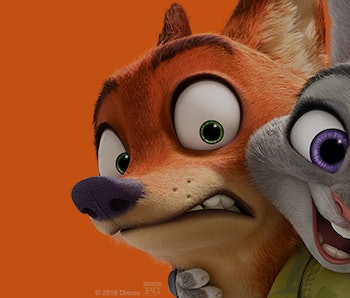 When I wrote an article in December making the case that Zootopia would be Disney’s exploration of the furry subculture, reaction was mixed. I gained a few new Twitter followers with cartoon fox avatars, but I also had to block quite a few furries who responded with stunning vitriol. I had offended people by implying heavily that Zootopia-themed animal suits, which went up for sale on Furaffinity.net just days after the first promotional teaser for the movie hit the internet, would be used in sexual role play.

The outraged masses tweeted, emailed, and took great pains to remind me of the Vanity Fair article that sought to marginalize their community. Even those who weren’t outright angry sent me blog posts, podcast recordings, and photos from conventions, insisting that sex has nothing to do with being a furry. I’d reached under all that faux fur and struck a nerve.

Having seen Zootopia, I’ve revisited my original article and the thinking that animated it. I have this to say: I was right. The film caters specifically to furridom and the belief system that comes with it. Animals in the film repeat the city’s mantra, “Anyone can be anything!” to each other a suspicious number of times. The movie also posits a world in which all manner of animals live together, wearing human clothes and walking on hind legs. Its characters, though flirtatious with each other, never actually talk about reproduction or sex. The only couples we see are married, and are hetero-species. At the end of the film, Judy, a bunny, tells Nick, a fox, that she “loves” him, but they never kiss.

As I sat in a crowded theater full of children and adults, all of us wearing the bunny or fox ears the people running the screening had given us, I felt a weird pang of disappointment in that final moment. I had entered the film laughing at the furries who had accosted me online for suggesting that their fandom had roots in sexual and flirtatious activity. I realized quickly, while watching Zootopia, that the movie was not only for furries, but also an emotionally engaging explanation of what a furry utopia might look like. God help me, when the rabbit and fox came in for a hug at the film’s climax, I wanted them to kiss! I leaned over and told my friend, “This is the most chemistry I’ve seen between two leads this year!”

She turned back and said something that hit home: “Do you realize how many furry awakenings are happening in this theater right now?”

I expect many Zootopia reviews will examine what the film does with race; there are quite a few problematic jokes meant to parallel the concerns of black Americans. In one scene, Judy Hopps tells a cheetah that “it’s OK for one bunny to call another bunny ‘cute,’ but if you do it …” and he reacts with embarrassment. In another, Nick touches the poof of hair on a sheep’s head and Judy exclaims, “You can’t just touch a sheep’s wool!” Judy isn’t coded as stupid for verbalizing these concerns, but they’re definitely meant to be trivial — specifically that we’re meant to take as a given that prey animals live with predator animals, a potentially potent metaphor.

The top-notch animation in Zootopia makes every character look stunningly touchable — and touching, sexual or no, is at the heart of furriness. Furries call grooming behaviors “scritching” and often argue that they are unrelated to sexuality, which is ludicrous. Furry fandom, though it maligns those who are into outright “yiffy” (penetrative furry) porn, is built on connections between those who feel disconnected to their human bodies. That intimacy happens emotionally and physically, so even if the average furry isn’t googling what Nick Wilde looks like naked, they’re probably going to enjoy the near-electric chemistry that Disney animators have created between their leads.

The most specific call-out to furry sensuality (I say “sensuality,” lest I get tweeted at again) in the film is during its credits sequence, in which the sexualized gazelle played by Shakira performs surrounded by hyper-masculine tiger dancers who bear a stunning resemblance to the furry fandom’s “daddy”: Tony the Tiger. What, I ask, is the point of making certain animals in the film looked like muscular, scantily clad men, if not to wink at those who specifically enjoy images like that? The average, non-furry kid doesn’t care if Gazelle’s dancers look like extras from Magic Mike.

While some furries responded by tweeting their yiffy come-ons at Chester Cheetah (the Cheetos mascot) instead, many continued to publicly message the Tony account as if it were run by a real, anthropomorphized tiger who cared about divides in the furry fandom. It was clear that, while not all furries are necessarily into sexual messaging, all furries involved with the public tussle were entertaining a fantasy.

That’s what Zootopia is about, really: building a world around a very specific fantasy. Some might argue that children fantasize about animals having human motivations and intelligence, and that Zootopia is just an extension of that headspace. A more apt description of the film is that its central appeal is directly pulled from the heart of the furry fandom. A scene halfway through the movie follows Nick as he takes Judy to an animal nudist colony, hoping to embarrass her out of continuing with her case. This is just one of a series of moves the characters use in order to prod at each other, hoping for a reaction while building an emotional bond. That’s not the structure of a children’s adventure film, that’s classic romantic comedy structure. Again, who is that supposed to appeal to, if not adult furries? What child dreams of watching an animated Roman Holiday or Charade cast entirely with humanoid animals?

Although Disney likely won’t ever admit to making a film for a very passionate sliver of its base, that’s exactly what it seems the company has done. The good news is that appealing specifically to furries doesn’t make Zootopia an unpleasant or un-relatable view. It’s not a transcendent Pixar-style dreamscape for the whole family, but it’s a damn good reboot of It Happened One Night.