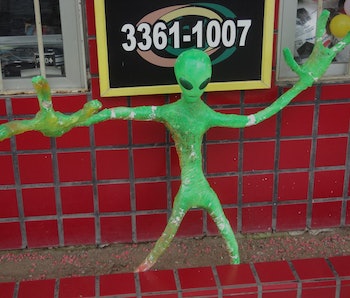 People believe in conspiracy theories for all sorts of reasons. Whether you’re looking for an explanation for what you saw with your own two eyes or you’re just looking to dip your little toe in the wormhole, we’ve got a list of the best, most bizarre documentaries on Amazon Prime and Hulu to quench your conspiracy theory thirst.

(Looking for Netflix? Head over here.)

The biggest topic out there when it comes to conspiracy theories? Aliens. Lots and lots of aliens. Aliens helped build the ancient pyramids and they also are controlling the entire world. Right now. Seriously. Some of these documentaries will give you the chance to listen to some pretty important people — U.S. military generals and real-life scientists — talk about the reality of aliens. And, no, they are not all little green men. Oh, and we can’t leave out a ghost story or two. Best of luck, and try getting a little bit of sleep.

“On March 19th, 2002, Gary McKinnon was arrested for hacking into 97 Pentagon and NASA computers over a 13-month period, in what authorities call the “biggest military computer hack of all time.”

“Hidden in the Bible are ancient secrets. The marriage of Jesus and Mary and their children; the destruction of the tower of Babel by an alien race called the Anunnaki, and the hidden code that holds the revelation about future events.”

“We have discovered that the NSA spies on every American citizen, and we only need the national media to see that many of the New World Order plans are already in place.”

“Pirates and Sailors fought many battles at sea but many lost didn’t go quietly into the murky depths. This killer collection of Ghostly Sea Hauntings will curl your toes and shiver your timbers with real ghost tales from the depths of the Paranormal.”

“The most credible UFO witnesses from around the world tell stories that challenge reality in ‘I Know What I Saw,’ a documentary guaranteed to change the way we see the universe. Award Winning Film Director James Fox brings together the testimony of Air Force Generals, Astronauts, Military and Commercial Pilots, Government and FAA Officials from seven countries; their accounts reveal the truth.”

“Largely considered one of the best documentaries ever produced on this subject, this groundbreaking feature-length documentary traces the history of one of the most powerful stories of our time, the UFO phenomenon, from the dawn of the modern era all the way up to present day. Packed with amazing information, expert analyses, and interviews with leading UFOlogists.”

This post is periodically updated to reflect the ever-changing roster of documentaries on Hulu and Prime. You can find the previous version of this post here.

More like this
Culture
Jan. 27, 2023
The Master was called a movie about Scientology, but it’s about so much more
By Dais Johnston
Culture
Feb. 3, 2023
Signs is Remembered as M. Night Shyamalan’s Alien Movie, but it Has a Human Heart
By Mónica Marie Zorrilla
Culture
Feb. 2, 2023
After Harry Potter, Daniel Radcliffe Obviously Had to Play a Farting Corpse
By Alex Welch
LEARN SOMETHING NEW EVERY DAY.
Related Tags
Share: