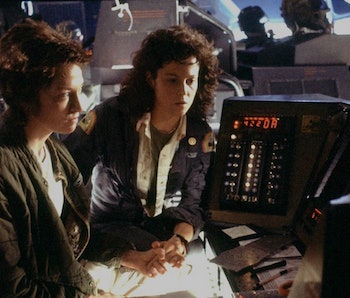 The push-button computers aboard the spaceship Nostromo might look a little clunky now, but the devices Ellen Ripley (Sigourney Weaver) used in Alien pretty much paved the way for text-message emojis today.

A great blog called Typeset in the Future documents various fonts found in science fiction movies. And Ripley’s keyboard from Alien is of particular interest. The blog reveals that Designer Ron Cobb created a symbolic systems called “Semiotic Standard for All Commercial Trans-Stellar Utility Lifter and Heavy Element Transport Spacecraft.” In short, all the buttons on Ripley’s keyboard on the Nostromo have pseudo-pictograms, which all connote specific functions or notifications. A symbol of an upside-down stick figure lets you know “Artificial Gravity Absent,” a blue cube inside of a red cube denotes “Refrigeration,* and green and white little cubes are for coffee, which somehow predicted Starbucks’ color scheme.

On Friday, a Twitter user named “neontaster” posted a high-resolution version of the Semiotic Standard symbols. These are based on the original production drawing by Ron Cobb for Alien.

Fans immediately noticed similarities between these symbols and contemporary emojis. Of course, because the crew of the Nostromo didn’t yet have any knowledge of the chest-bursting alien Xenomorphs, which would kill all of them but Ripley, there doesn’t yet appear to be a Semiotic Standard symbol for “Beware Creature With Acid Blood.” Perhaps Apple will create an emoji for the chest-bursters in the meantime.

Since it’s already been established that the crew of the Covenant drinks the same space-beer as the crew of the Nostromo, there’s a good chance tiny symbols in Alien: Covenant will be similar to Semiotic Standard, with perhaps, a few new additions.