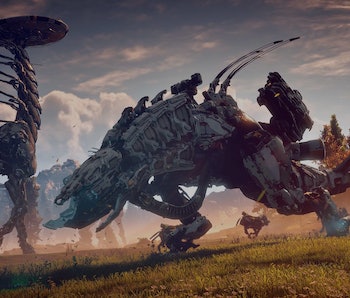 Horizon Zero Dawn is one of the year’s first new AAA games and a fresh new franchise for Killzone developers Guerilla Games. While reviews of the game are rolling in, most people won’t get a chance to play until February 28, when Horizon Zero Dawn officially launches. That doesn’t mean we can’t have fun until then, though. There are plenty of games that share some of Horizon Zero Dawn’s flavor, whether you want to fight massive beasts, sneak around with a bow and arrow, or master your own herd of dinosaurs. There’s a game for that! Let’s take a look at five games to keep you busy until you can get your hands on Horizon Zero Dawn.

If Horizon Zero Dawn’s vast open world and primitive setting are what draw you, you might want to give Far Cry Primal a go. In an unexpected tone shift for the series, Ubisoft took its own beloved open world franchise back in time to 10,000 B.C. The tactical stealth elements remain the same, but now this is ultimately a game of survival. Gone are the guns, rockets, and charismatic villains you may be useful. In there place, you must hunt and forage for supplies to craft your own rudimentary spears and arrows. The story is much more subdued, favoring the natural drama that unfolds in the early days of human civilization. It’s a solid choice if you want something a little different.

You won’t find any dinosaurs here (at least in the newest iterations of Tomb Raider), but you will be treated to one of the finest action-adventure games of the past few years. Similar to Horizon Zero Dawn, you guide the iconic Lara Croft through stunning open world maps, all while gathering materials you need for survival, wrestling bears, and, of course, exploring tombs. Tomb Raider easily has the best bow and arrow in any third person shooter, and the controls elsewhere are equally flawless. If you want a stealthy shooter with fun platforming and puzzle challenges in epic settings, look no further.

Enslaved: Odyssey to the West

Giant, vicious robots? Check. A post-apocalyptic world? Check. Awesome female protagonist? You got it. Enslaved draws many connections to Horizon Zero Dawn, but it’s also one of the most underrated games of the last generation. While not much is revealed about humanity’s fate, we do get the sense that people were overrun by mechs sometime in the distant, distant past. Enslaved features gorgeous set pieces and some of the best script writing in video games, period, thanks in part to the work of Alex Garland, who also wrote films like Sunshine and 28 Days Later.

Monster Hunter can be a bit of an acquired taste, but once you get sucked into the loop you’ll have trouble pulling yourself out. Monster Hunter doesn’t really have a story, per se. The point of the game is to go out and hunt powerful monsters, until you find and can use more powerful weapons to take out even more impressive beasts. If you’re impressed by the scale of the monsters in Horizon Zero Dawn, you’ll likely be drawn to Monster Hunter as well. Monster Hunter Generations does a good job of summing up the series, as its jam-packed with some of the best encounters from the series collectively.

Or maybe you don’t want to settle for simply hunting dinosaurs. Maybe you want to capture and tame them to build up your own dino army. In that case, give ARK: Survival Evolved a go. This multiplayer survival game has been in early access for ages, but it’s still a relatively polished experience, and there’s nothing out there quite like it. It starts as most survival games do — you’re stranded, naked in the wilderness. From there it’s up to you, the player, to survive or perish. Gather supplies and build a base. Eventually you’ll be able to tranquilize and tame the dinosaurs roaming the island.