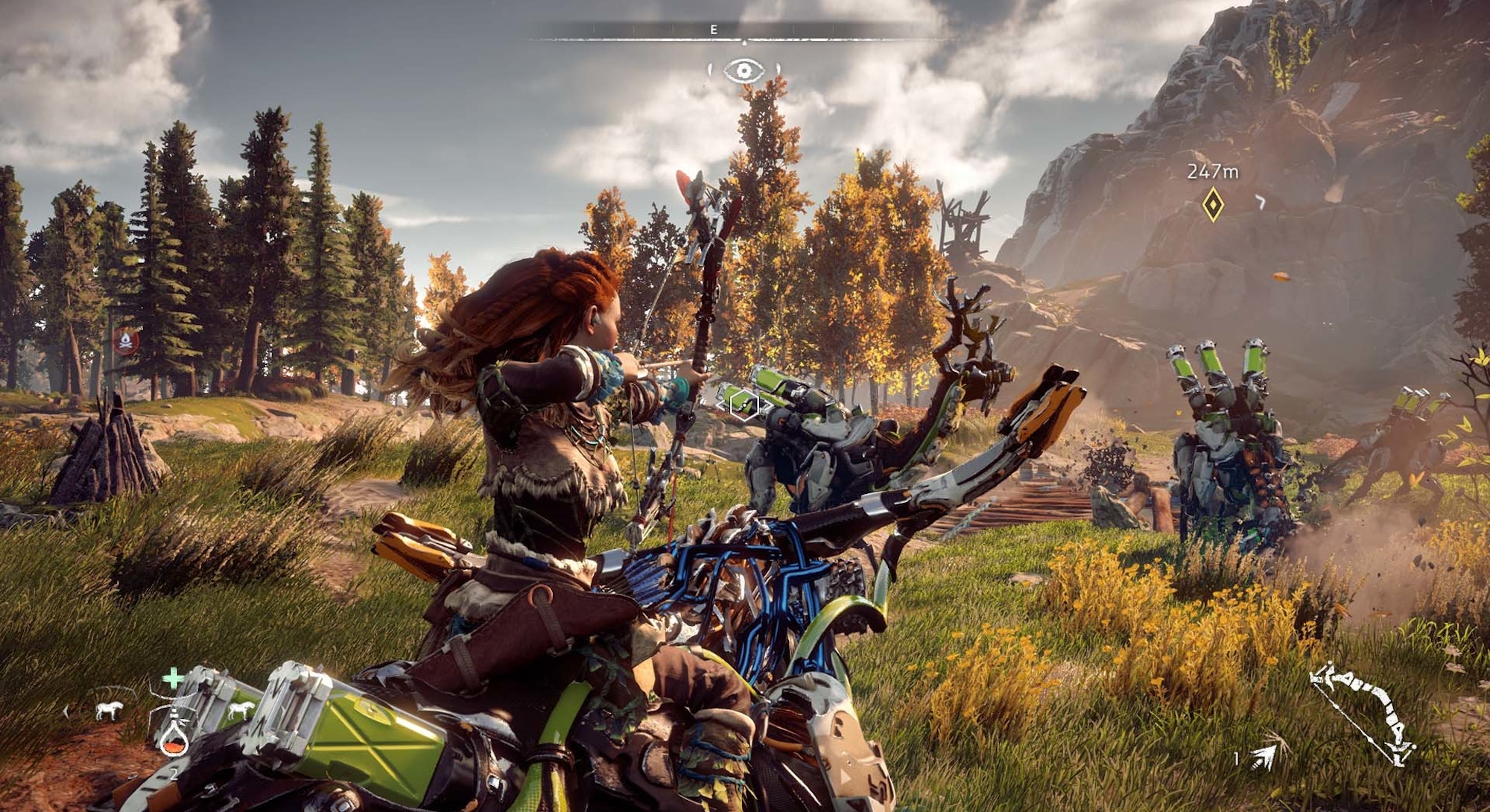 Going hands-on with Horizon Zero Dawn at Gamescom in Cologne was like experiencing a true David versus Goliath encounter. Flesh and blood versus thick armored steel and more firepower than even Michael Bay could handle. While Guerrilla’s former hit Killzone was a bit like Call of Duty plus aliens with its big guns, explosions, and Hollywood-scripted action, Horizon Zero Dawn is much more methodical.

For example, during the demo we freeze certain body parts of an enemy with a special arrow to reduce its combat capabilities. And when it comes down to close-quarter combat, we don’t just fire a shotgun, but sneak in slowly and go for the kill with an electric spear that destroys the chip heart of a robotic dinosaur called a “Watcher.”

But you can’t just hide and wait, because the Watcher’s scanner tracks you even within bushes. So there’s an element of stealth to it all, up to and including hiding the creature’s dead body. “There is a whole family hierarchy, and the Watchers are called that because they are on the watch for any attacker and protect other animals as well,” explains game director Mathijs de Jonge from Guerilla Games. He would know, as he’s essentially the one to blame for all of them.

From Killzone to Jurassic Robo World

It’s uncommon for a studio’s DNA to significantly from title to title, but how did it all come together? From Killzone to… this? “We have two big internal teams,” explains de Jonge, “and while one of them worked on Killzone: Shadow Fall, the other had to decide what’s next.” That ‘what’s next’ ultimately became Horizon, but the path to that point was not exactly direct. It began with a pitch jam.

“Everyone has the chance to throw in a pitch idea [to the jam], and we ended up with 40 pitches. After that, we voted and colleagues were asked to join small pitch teams to produce a super quick and very rough prototype,” he says. “We had two very successful pitches: One was quite similar to Killzone in style and tone, and the second was basically just a polygon figure in a white sandbox fighting against a huge T. rex.”

And that’s how Horizon was ultimately born. They toyed around with that prototype and combined the technology- and industrial-driven aesthetic of their previous work with dinosaurs.

We don’t yet know why people like our female protagonist Aloy have left the so-called “Old World” — the skyscrapers of a town that looks a bit like New York City — and chosen to live in the wild. But we do know a bit about Aloy herself. “Aloy is very heavily inspired by very strong female warriors like Ygritte from Game of Thrones especially,” de Jonge says. “She isn’t concerned about her beauty or what she wears, she is more of a ‘smart soldier’ type of person, and her tribe gives her a hard time because they fear retaliation when Aloy intervenes in gods business.”

Despite the danger, it feels like a calm and beautiful little open-world paradise. During our time with the game, there were countless moments where we just stopped to look around and watch creatures as big as trucks with extremely long necks that end with a radar tower as they went about minding their own business. Up close, we can count the thick blue cables covering long, bronze titan limbs with orange tubes to cool the massive machinery.

“Horizon is a nerd dream come true for us, and we want this world to feel believable, so we invest a ton of time in every design,” says de Jonge. “But it’s also about doing things differently: Almost every movie or game set in the future is dark and grim. More like a desert than the Earth we know.”

But not so with this game. This game takes a different, but still haunting, tact.

“Horizon is the result of another species taking over,” de Jonge continues. “A species, by the way, that has their own society rules. Like there are shell walkers, for example, that carry resources around, and every animal has a unique function within society.”

It’s All About Gameplay Loops

“Very early on, we had a prototype running in the Killzone 3 engine, and it was not a lot of fun,” de Jonge says. “I mean, it was okay, but [it] didn’t deliver the gameplay we wanted to go for, because we gave our protagonist assault rifles, rocket launchers, and even a Gatling [gun].”

The problem was that this approach limited them in ways they didn’t like. What worked perfectly fine in the likes of Killzone just didn’t mesh with what they were going for this time around. “The moment you [use those weapons] is the moment where you limit gameplay loops to duck and cover, shoot, duck and cover,” says de Jonge. That’s why Aloy relies on a variety of more techno-primitive weapons.

Additionally, Horizon goes a different path by also requiring players to craft every weapon upgrade and every arrow you want to shoot. Want some better body armor? Unfortunately, the humans of Aloy’s world have forgotten how to cut steel and use the technology required to make it. They just use what they can get from robotic animals with resources split into normal, rare, and unique materials — most of which is acquired by hunting them down.

And that’s what we try to do when a corrupted, basically hacked, mech attacks the village during our demo. We’re tasked with finding a bunch of Grazers — creatures that look like mechanical Rudolphs of The Red-Nosed Reindeer variety — thanks to them carrying a certain fuel on their back. You can actually see their alarm status on their nose, which is a fun little detail and helps in developing our combat strategy.

But even then, we need to outrun the Watchers, who — according to Guerilla Games — see themselves as the guardians of the animal world. They aren’t terribly fast, so we just need to go for a ride on a mechanical bull called a Broadhead. That itself is no easy task, but riding a Broadhead gives us the speed necessary to hunt down Grazers while also being able to put up a fight against the likes of a Thunderjaw, the T. rex-looking king of this world.

And that feeling — the rush of the attack, the riding the Broadhead, and the tracking down of the Grazers — is the clearest indication of the game’s lineage. It might not share a basic gameplay loop with Killzone, but the scope and feel are unmistakable.