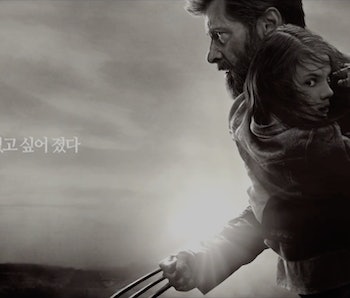 Wolverine has traveled all around the world for a long time. But could the former X-Man have been a TV star in South Korea? A new international trailer for Logan makes quite the argument as it cranks the melodrama of the last Wolverine movie so high, James Mangold’s viciously violent “superhero” movie almost looks like a soap opera.

In the black and white trailer, everything is in slow-motion and set to contemporary ballads. The Korean text overlayed the images roughly translate into, “These hands won’t hurt me” and “I want to be by your side.” There’s also no footage of any action, like Wolverine’s bloody murders against Donald Pierce’s Reavers seen in the domestic trailers. With these trailers, Logan looks less like a Wolverine movie and more like the K-dramas my mom and whole swaths of the internet are obsessed with.

But rest assured: Logan is indeed the brutal, R-rated swan song of Hugh Jackman’s synonymous comic book character that he’s played for 17 years. On top of the glowing reviews, Logan is a bloodbath in a way last year’s Deadpool wasn’t. While Deadpool was violent, it was almost cartoon-esque. Logan takes a grittier approach and almost makes you forget that this movie came from the bright, glossy pages of Marvel Comics.

Logan will be released March 3.