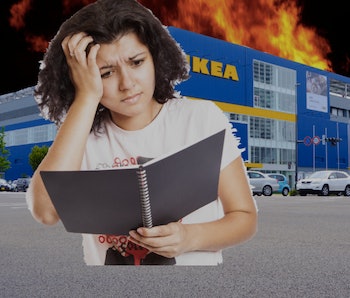 Anyone who’s ever thrown their Ikea Färlöv against a wall in a mid-construction rage might have their heritage to blame. According to a new study, spatial anxiety is an independent, diagnostically different feeling separate from general anxiety, and it might be rooted in a person’s genes. Prospective parents be warned: Building Ikea furniture might be an excellent test for a relationship, but fighting couples might very well pass on that anxiety to their kids.

In a study published Wednesday in Scientific Reports, researchers from King’s College explain that certain subjects are known to cause specific anxieties, such as mathematics and spatial tasks, but the actual roots of those anxieties are largely unexplored. By examining the origin of and the relationship between three types of anxiety — general, math-induced, and spatial — they hoped to determine whether anxiety treatments need to be specialized according to subtype.

Spatial anxiety is, fittingly, described as the anxiety that people feel while dealing with situations that have a spatial component — like using a map to navigate a new city, or figuring out how to build Ikea furniture from a set of frustratingly text-free instructions. To determine its roots, the researchers examined data from 1,464 pairs of identical and fraternal twins who took part in the Twins Early Development Study, a long-term analysis of twins born in the United Kingdom between 1994 and 1996. The twins took a series of online tests designed to measure their levels of general, mathematical, and spatial anxiety. Meanwhile, the researchers examined the genetic variation of the pairs of twins to determine how much of their anxiety was caused by genetic versus environmental factors.

Exactly which genes lead to each type of anxiety has yet to be determined, but they seem to be related to the processing capacity of the brain. The results indicated that each type of anxiety had its own “specific neuronal and cognitive processes” in addition to the base-level physiological and cognitive processes shared by all three forms of anxiety. For example, mathematics anxiety was more strongly associated with the disruption of visual working memory, while general anxiety interfered more with the verbal working memory system. Spatial anxiety could be further broken down into subtypes of stress — navigation anxiety and rotation-visualization anxiety — differences that have to do with differences in DNA, study author Margherita Malanchini, Ph.D., explained in a video.

Interestingly, one gender-related result that they expected to observe did not occur: While women demonstrated “significantly higher levels of anxiety than males did in all domains,” the researchers couldn’t peg this difference to environmental factors. Previous studies have found that women who think math is important and are aware of the social stereotypes about women and math tend to feel more anxious about math than men, but this study didn’t find any differences related to these environmental factors.

If Ikea furniture building sends you into a panic, take heart: While you can’t readily change your genes (at least, not yet), you can change your environment to make it less anxiety inducing. Previous studies have found that anxiety is easily passed on when people try to help each other and that enjoying an experience is more important than intelligence when it comes to successfully solving problems. Next time you’re faced with the prospect of Ikea furniture building, you may want to skip the pictogram instructions and just make a request to Task Rabbit.

More like this
Science
20 hours ago
Watch squealing dolphins hunt fish and snakes from their point of view
By Jennifer Walter
Science
8.14.2022 1:00 PM
'Gifted' dogs may share this one personality trait. Does your dog have it?
By Tara Yarlagadda
Science
8.10.2022 3:27 PM
Climate change may push North America’s forests to a “tipping point”
By Tara Yarlagadda
Related Tags
Share: