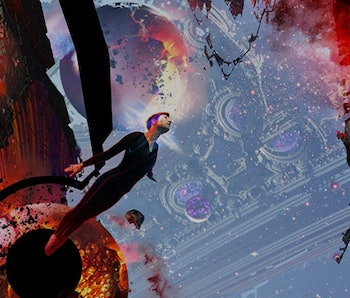 On Tuesday, the Science Fiction and Fantasy Writers of America released its nominees for the 2016 Nebula Awards and there were two glaring omissions in the category for Best Novel. Cixin Liu’s Death’s End and Babylon’s Ashes by James S.A. Corey. Does the nominating committee of the Nebulas have something against science fiction that everyone loves?

To be clear, many of the books nominated by SFWA are great, particularly N.K. Jemisin’s The Obelisk Gate. Plus, the Victor LaValle novella The Ballad of Black Tom is a fantastic and much welcome nod to a stupendous author who has been blurring genres for almost a decade. But figuring out why Death’s End and Babylon’s Ashes were excluded is baffling.

Death’s End, while originally written in Chinese, was published for the first time in America in 2016. According to the nominating rules of the Nebulas, this makes it totally eligible for an award this year. As the stunning conclusion to the epic alien-centric Remembrance of Earth’s Past trilogy which began with The Three-Body Problem, it seems like a Nebula nomination for the series coming to a close in English would be a given.

Second, there’s really no reason why the latest installment in one of the best contemporary science fiction and book series — the latest Expanse book, Babylon’s Ashes by James S.A. Corey — wasn’t nominated for a Nebula Award. Babylon’s Ashes is in many ways the best of the Expanse series so far, not just because it continues to deliver highly readable sci-fi, but because it proves just how bold its authors (Daniel Abraham and Ty Franck) truly are. If you were in a bookstore and a knowledgeable bookseller were to recommend to you the best outer space-centric sci-fi book series right now, they would give you The Expanse — and even if you started with Babylon’s Ashes (the sixth book), that would be fine.

Similarly, why would such an excellent series about aliens like Death’s End be omitted? The first of Cixin Liu’s books, The Three Body Problem was nominated in 2015, why not nominate the concluding book of the series? Again, it seems like the Nebulas looked at the two most obviously enjoyable science fiction novels of 2016 and said, “Nah.”

Nominating procedures for awards given in science fiction and fantasy publishing are notoriously sticky. But, regardless of why these books were omitted, the result is the same: they’re missing. If one wants to look for the best science fiction books of last year, the Nebula list is lacking at least two of the most popular, and undeniably, very best of 2016.