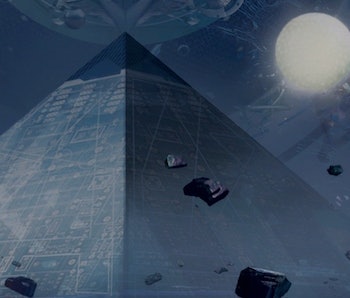 Chinese science fiction writers are having more fun with the genre than anyone else, and in fact, might even be producing its best new works. And now, in the years following the success of Liu Cixin’s award-winning novel, The Three-Body Problem, western audiences are starting to take notice.

For an easy introduction to this massive subgenre, see Ken Liu’s new anthology of short fiction, Invisible Planets, which highlights his favorite contemporary translated Chinese science fiction. And for readers who want to dive more deeply, three essays at the end of the book argue over the actual definition of Chinese science-fiction. In his essay “The Worst of All Possible Universes,” Liu Cixin himself believes that The Three-Body Problem actually helped to recontextualize science fiction in China very recently. In 2006, at the time of Three-Body’s publication in China, he wrote, “China’s science fiction market was anxious and depressed. The long marginalization of science fiction as genre led to a small and insular readership.”

Liu suggests that it has something to do with the book’s thick layer of imagination placed atop its realism. Liu implies that an adherence to strict realism is what shackled Chinese science fiction prior to 2006. “Writers struggled to attract readers outside the tribe and felt they had to give up their Campbellian science fiction fundamentalism and raise the genre’s literary qualities of realism.”

Jarringly, this is not unique to China, because what Liu Cixin is talking about is universal to science fiction publishing. If The Three-Body Problem was a big deal in Chinese science fiction in 2006, when Ken Liu’s translation showed up in American in 2014, it was also greeted as a breath of fresh air.

A contemporary science fiction writer is supposed to somehow reach a mainstream audience, demonstrate a convincing grasp of feasible science on the page, and also pay homage to previous sci-fi. If there’s one overwhelming trend from Liu Cixin or any of the other authors in Invisible Planets, it would seem to be that they looked at all those impossible criteria and said, “Fuck it.” And then, they wrote science fiction that could be realistic, but didn’t have to be. Finally, they were having fun with the genre.

Make no mistake, Invisible Planets is 100% Ken Liu’s baby. And though he might be known as the translator of Liu Cixin’s The Three-BodyProblem, the anthology wasn’t exclusively born out of that novel becoming popular in translation. “I had published 40+ translations of short Chinese fiction, and I realized that I had enough material to create a compelling anthology for readers interested in hearing new voices,” Ken Liu told Inverse. “It had nothing to do with The Three-Body Problem other than the fact that one of the stories in the anthology is adapted from a chapter in [that novel.]”

That’s why “whimsy” is the pervasive thread holding all the stories in Invisible Planets together, and “Grave of Fireflies” by Cheng Jingbo is one of its stand-out stories. In it, the author describes a future in which starships are seemingly evacuating the remnants of humanity in a mad dash to find the last remaining stars that might still be burning. Stars are going out left and right all around the universe, and no one knows why. Meanwhile, a kind of portal helps to guide the main character, Rosamund, to safety. “To the south was the Door Into Summer, built from floating asteroids like a road to heaven,” Cheng writes.

Xia Jia’s own story “Night Journey of the Dragon Horse” is another good example: it features a sentient, mechanical creature lumbering through a decayed, vaguely future-dystopian landscape. Xia Jia based the Dragon Horse on “real” dragon horses on planet Earth; it’s a kind of parade float, an attraction that would delight children. Imagining what a living version of a complex parade float might look like wouldn’t occur to most American science fiction writers. Is lack of imagination to blame? More likely, science fiction has been long dominated by western imagery and tropes, meaning everything about the imagination in Chinese science fiction seems fresh.

But how does one define “Chinese Science Fiction”? The essays in Invisible Planets don’t totally agree. In his essay “What Makes Chinese Science Fiction Chinese?” Xia Jia writes that the “disparate stories” found in the anthology “speak of something in common, and the tension between Chinese ghost tales and science fiction provides yet another way to express the same idea.” That’s not to say that there was ever a plan to present one unified theme with this anthology. Editor Ken Liu told Inverse that the book hopefully gives “… an overall sense of Chinese science fiction as a diverse category that includes many themes and approaches,” but Liu stopped short of saying that the book claims any “comprehensiveness” in terms of covering all of Chinese science fiction, ever. “It was conceived of as a showcase for some wonderful works of contemporary Chinese science fiction as gathered by an American writer and fan: me.” Ken Lui said. “I’m an American writer, so I write in the tradition of the Western canon … and I can’t claim that I’m too heavily influenced by any single school of thought.”

Regardless of motivation or total comprehensiveness, Invisible Planets is a wake-up call for a serious fan of science fiction. The message here is: ultra-realistic hard science fiction isn’t the global future of the genre, nor is a blend of literary fiction with borrowed “edginess” from the New Wave of the 20th century. Instead, Invisible Planets puts print sci-fi firmly where it should be: on the edge of what still isn’t quite possible in life, but can be glimpsed in art.

Quoting Gilles Deluze, Xia Jia reminds readers that science fiction is always in a state of “becoming.” There, finally, a true definition for science fiction — Chinese or otherwise might have been discovered. Chinese science fiction’s influence on the rest of the world has opened up a whole new frontier of discovery. Invisible Planets is probably just the beginning.

Invisible Planets is out now from Tor Books.