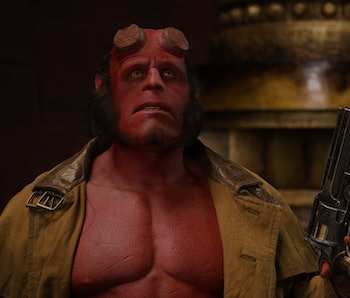 Hellboy won’t be bringing about the apocalypse anytime soon on the big screen. After teasing fans with the possibility of a third installment of the Hellboy franchise, director Guillermo del Toro took to Twitter on Tuesday to announce that Hellboy 3 will definitely not be a thing.

After taking an “informal poll” on Twitter on January 18 (where the only possible answers were “Yes” or “Hell, yes”), it seems del Toro fulfilled his promise to fans that he’d sit down with the powers that be and discuss the possibility of Hellboy 3 if the poll got 100,000 votes in 24 hours. But just because del Toro and the rest of the world were excited about a third film starring Anung Un Rama and the Bureau for Paranormal Research and Defense didn’t mean Universal Studies was.

The answer: not gonna happen.

“Hellboy 3 Sorry to report: Spoke w all parties [sic],” del Toro tweeted. “Must report that 100% the sequel will not happen. And that is to be the final thing about it.”

About 2 years ago, del Toro participated in a Reddit AMA where he gave a full synopsis of how he thought a third film might go down:

The idea for it was to have Hellboy finally come to terms with the fact that his destiny, his inevitable destiny, is to become the beast of the Apocalypse, and having him and Liz face the sort of, that part of his nature, and he has to do it, in order to be able to ironically vanquish the foe that he has to face in the 3rd film. He has to become the best of the Apocalypse to be able to defend humanity, but at the same time he becomes a much darker being. It’s a very interesting ending to the series, but I don’t think it will happen.

Even back then, del Toro was hesitant to get people’s hopes up. Too late, though, del Toro. You broke everyone’s hearts.