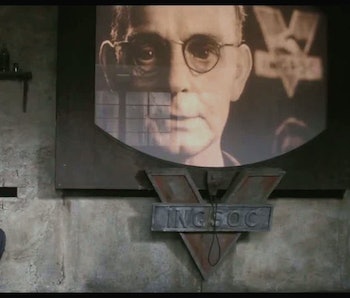 What are you doing on April 4? If you’re anything like the people who have bought copies of Nineteen Eighty-Four, George Orwell’s novel first published in 1949, you’re probably going to the theater to watch the film version, 1984, released in 1984.

The movie, directed Michael Radford and starring the late John Hurt, is going to be shown in just fewer than 90 art house cinemas in 79 cities in 34 states across America and in Canada.

“These theaters owners strongly believe in supporting the National Endowment for the Arts and see any attempt to scuttle that program as an attack on free speech and creative expression through entertainment,” reads a statement posted to unitedstatesofcinema.com. “This event provides a chance for communities around the country to show their unity and have their voices heard.”

The story’s resurgence has been credited with the election of Donald Trump to the White House, a fact not lost on the organizers: “Orwell’s portrait of a government that manufactures their own facts, demands total obedience, and demonizes foreign enemies, has never been timelier.”

The movie’s a fundraiser of sorts, with proceeds from the door going to “local charities and organizations” for “underwriting future educational and community-related programming.”

In Orwell’s story, April 4 is the day that protagonist Winston Smith (Hurt) starts his rebellion against the government when he begins to keep a diary, something verboten by the ruling party.

If you’ve only ever seen Black Mirror, this classic is worth your 113 minutes. If you’ve not seen it in a while or haven’t seen it on the big screen, there’s likely never going to be a better opportunity.

Below’s a map of every movie theater we know of that is showing 1984 on April 4.