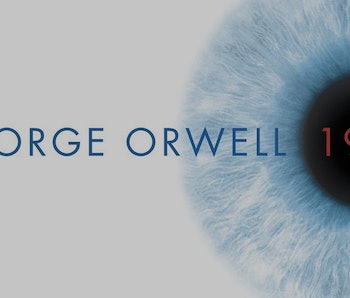 When it comes to news about the famous cautionary tale 1984, it’s especially important to get one’s facts straight. George Orwell’s bleak dystopia gave us the fictional notion of “newspeak”; the idea that ambiguous euphemistic language can lead the masses into believing all sorts of falsehoods. So, when several news outlets reported that bookseller Amazon was out of copies of 1984 due to high demand in the wake of Donald Trump’s presidency, the number one question should be: Is that really true?

Yes, there has been a legitimate spike in sales. A representative for Penguin (the owner of the Signet; the edition that’s so popular now) told CNN on Tuesday that it “put through a 75,000 copy reprint this week. That is a substantial reprint and larger than our typical reprint for 1984.” But that doesn’t mean you can’t get the book.

Most of the news about 1984 being “out of stock” at Amazon focuses on one edition of the book: the Mass Market Signet Classics edition. This means it’s the “cheap one”, usually priced at $9.99 but sells for $8.19 on Amazon. And yes, if you try to order this version of 1984 on Amazon, the online retailer will tell you the book is out of stock. To be clear, the more expensive Houghton Mifflin Harcourt hardcover omnibus edition of 1984 packaged with Animal Farm will ship in roughly two weeks from Amazon. So, getting an expensive version of the book is hard to get from Amazon, too. But saying that it’s impossible to get a physical copy of 1984 through Amazon isn’t right. You can buy the same Signet edition of the book used from independent sellers on Amazon itself.

You can also get this in-demand classic readily at a bookstore. Inverse reached out to Community Bookstore in Brooklyn, where Hal Hlavinka informed us that there were indeed copies on the shelf of that particular Signet edition of 1984. Meanwhile, when Inverse contacted the flagship Barnes and Noble store in New York City, booksellers there confirmed that though that Signet edition of the book was also out-of-stock, other versions of the book were on the shelf. These other editions are simply larger, slightly more expensive versions of the book. There isn’t any different text from the Signet edition.

Bookstores generally order their books two different ways: directly from the publisher or from distributors. The two most used distributors are Baker & Taylor and Ingram. Sources in the publishing world told Inverse that the online systems for Ingram were confirming plenty of copies of the Signet 1984 in stock, but that several thousand copies were “on order.” Generally, distributors like Ingram order a new stock of books from the publisher based on sales trends. So, the sales spike is probably the reason why Amazon is out of stock, but it’s not necessarily the only reason. When Inverse contacted Ingram directly, a representative for the company refused to comment on exact stock numbers. Baker & Taylor also declined to comment.

Amazon doesn’t use Ingram or Baker & Taylor to get its stock of books, but there have historically been other reasons why Amazon might be out-of-stock of a book that is unrelated to huge spikes in sales. Famously, while Amazon was still locked in a legal battle with several of the major publishers, they temporarily made all titles from Macmillan Publishers “out of stock” in 2010 as a bullying tactic to force the publisher to agree to a pricing dispute. This isn’t to say that Amazon has made copies of 1984 unavailable on purpose this time, but the online retailer has been known to employ authoritarian tactics worthy of the thought police before. In 2009, all digital copies of 1984 also vanished from the company’s Kindle E-Reader devices thanks to a programing error.

At present, anyone can buy a digital copy of 1984 for their Kindle or even for their Nook. And it is true that a next-day online delivery of the least-expensive version of the Orwell classic is probably not possible at the moment. But, if readers need a same-day delivery of the book, their best bet is to walk outside and head to their local bookstore. The reason why Amazon is out of certain editions of 1984 is certainly due to a sales spike, but the solution in the short term, until Penguin prints more copies, is just to grab the book out there in the real world.