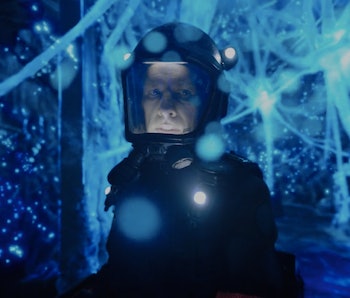 OK, now you can catch your breath. But we don’t blame you for hyperventilating a little bit: Episode 5 of The Expanse was among the finest hours the show has produced yet. Julie Mao returned, Miller died, and Eros went bye-bye.

It represented culmination to what the show has been building towards since Season 1. Funny story: Miller’s journey into the heart of Eros Station, finding Julie, and convincing her consciousness to veer the gigantic asteroid into Venus instead of Earth was actually the climax of author James S.A. Corey’s first book, Leviathan Wakes. Instead of just copying the books, The Expanse’s Executive Producer Mark Fergus and his collaborators decided to push the climactic moment a bit further down the line to the mid-point of Season 2.

To get some insider info on Episode 5’s most shocking moment, we asked Fergus about Miller’s big send-off and whether he is, in fact, dead or not.

Was it always the plan to build to this revelation at the halfway point of Season 2?

We originally hoped to get through a book a season, so it was supposed to be our Season 1 finale. The crescendo of how Miller’s arc concludes and Julie coming back was all very much from Leviathan Wakes. But we realized we were racing too fast, and we figured it should go into Season 2 a bit.

The end of this episode features the kinds of scenes that made me to want to make the show in the first place. Miller’s story is such a culmination that it’s really the heart of this first chunk of the show. To deliver it in a powerful and correct way, like my experience reading the books, was the most important thing.

Plus, we just loved having Thomas Jane around, so we kept him as long as possible.

How did you break it to Thomas Jane? Did he read the books?

He got all the way through Leviathan Wakes in the early weeks of shooting the show, so he knew that’s where Miller would end up. It’s difficult for an actor to know what their arc really is until you know how it all lands, and you know about the end of that character. For Miller, we talked a lot about the arcs of characters we love from movies like The Verdict and Dog Day Afternoon.

Main character deaths are a big deal, but could be done cheaply. How did you approach Miller’s death and sacrifice to make sure it had the intended impact?

It was important that we didn’t alter it from the books for the sake of the show. His journey doesn’t really have the same meaning until you end it that way. We wanted to really make it into a thriller where there’s a relentless pace, in a narrative sense.

The audience had to presume that this is an action-packed episode, the Roci crew will fix things, Miller will get out, and somehow things will be resolved. The energy of those kinds of stories just make you think all will be well. We wanted to build to a point where you think, “Wow, he might not get out of this.”

The more we sort of promised the audience that all would be well, the more surprising his last hurrah would be. Isolating Miller from the Roci crew and everyone else was the last push of him cutting the cord to the world. He’s going into the great unknown to discover what his life was all about and finds Julie. The point wasn’t for him to walk out of it.

The point of no return for me was when he tells protomolecule-infected Julie, “You made a guy like me believe in something.” You always expect the Roci crew to swoop in at the last moment, but not after that.

I hope a lot of people thought he’d convince her to stop Eros. But he says that line when he starts removing his gear, breathing in the protomolecule, and willfully infects himself.

We wrote that line at the very last minute. Thomas was doing the scene on the day, and we were looking for a moment to encapsulate his whole character, so we threw that in on the last take or two.

I’m only so far into reading the books, and as far as I’m concerned he inhaled protomolecule, so he’s dead.

He’s gone in the same way that that wasn’t really Julie on Eros. It was echoes of her consciousness or soul hanging on via the protomolecule.