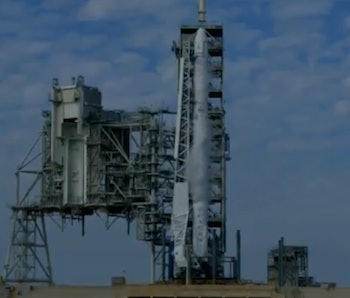 Just seconds before Saturday’s instantaneous launch window, SpaceX aborted its CRS-10 mission launch. The Falcon 9 rocket with a Dragon capsule perched atop it was set to transport supplies and experiments to the International Space Station, but about 13 seconds before launch, SpaceX’s launch team decided they weren’t satisfied with some of the readings they were receiving. According to SpaceX, the issue came from the thrust vector control on the rocket’s second stage. SpaceX founder and CEO Elon Musk tweeted, “All systems go, except the movement trace of an upper stage engine steering hydraulic piston was slightly odd. Standing down to investigate.” SpaceX plans to use the backup launch window at 9:38 a.m. EST on Sunday.

The issue behind the launch abort is a component called the thrust vector control. For a rocket that flies outside of the atmosphere, aerodynamic controls like rudders or wing flaps are useless. Therefore, the second stage’s attitude is adjusted with hydraulic actuators that alter the direction in which the rocket thrusts.

So when Musk mentions an “engine steering hydraulic piston,” this is what he’s talking about.

This cautious approach fits with SpaceX’s goal of making crewed missions a reality next year. The Government Accountability Office report, which came out this week, outlined the office’s concerns with SpaceX’s crewed capsule plans. Rocket launches already have very little room for error, so it’s not like NASA wasn’t scrutinizing the private spaceflight company before. But even within the exacting science of rocket launches, these missions have a particularly high degree of pressure on them to be absolutely perfect. Musk doesn’t seem worried, though. He wrote early Saturday morning that “SpaceX is highly confident of being able to fly U.S. astronauts in 2018.”

Musk specified that Saturday’s mission may have commenced without any problems, but that the company needs to “make sure that it isn’t symptomatic of a more significant upstream root cause.”

Inverse will monitor this story as it develops. Check back for updates.