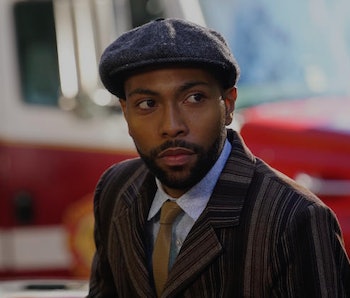 Despite FX and Marvel’s insistence that Legion is not an X-Men show, the show is already feeling like a classic mutant story by its second episode. First, Syd (Rachel Keller) and her superpowered buddies, Kerry (Amber Midthunder), and Ptonomy (Jeremie Harris), break David (Dan Stevens) out of the psychiatric hospital. Next, they bring him to a secluded woodsy area — a school for exceptional people, if you will — where he’s expected to learn more about his mutant powers from an elderly telepath, Melanie Bird (Jean Smart). Wait, why does that all sound like a formula we’ve seen before?

Legion may not feature any recognizable mutants yet, but the characters it has introduced all feel like amalgamations, or alternate versions, of the X-Men whom fans have come to know well. Syd, of course, is Rogue-like, and “dream artist” Ptonomy shares his memory-bending powers with Phoenix. There appear to be shapeshifters and mutants with telekinetic powers training in the background of David’s scenes with Melanie Bird. As showrunner Noah Hawley told Variety, none of the characters we’ll see in Legion are direct pulls from X-Men comics, though “parallel universes” in Marvel’s world allow Hawley to borrow certain traits from well-established mutants. It makes sense, then, that Melanie appears to be Legion’s Professor X stand-in.

There’s one problem with replacing Xavier, however: in Marvel comics, David is Xavier’s biological son, and FX’s Legion has done all it can to obscure all memory of David’s father. When Melanie and Ptonomy take David into his own brain, giving him a trippier version of cognitive behavioral therapy, they find they’re unable to see David’s father’s face from any angle. David simply remembers a man with a shadow where his face should be, which means the show will either ignore that part of his origin story, reveal something more insidious about his father, or Legion will end up bringing in James McAvoy or Patrick Stewart in some way or another after all.

As for the other mutants introduced this week, Ptonomy will apparently have several important exchanges with Syd in future episodes. Actor Jeremie Harris tells Blastr that his original mutant’s entire backstory will be on display, and that his most important interactions in the show will be with Syd and his mentor, Melanie. “He’s straightforward,” Harris says. “He likes to say things and get things done in the most efficient ways possible. I try to think about that: someone who has seen a lot and experienced a lot and doesn’t have time for a lot of the BS, I guess, of the emotions.”