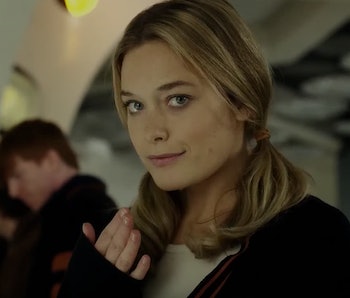 Among many other characters invented for FX’s Legion, Sydney Barrett (Rachel Keller) stands out as David Haller’s (Dan Stevens) primary love interest. She somehow manages to be both vanilla and integral to the plot, so it benefits Marvel fans to figure out what her powers are. This “manic pixie dream girl” archetype, with all her quirks and secrets, is here to stay.

We know from the Legion pilot that Syd is a fellow patient in the psychiatric hospital, though the reason she’s committed isnt clear. Now that she’s been revealed to be a mutant, like David, there are a few things we can assume about her trajectory in the rest of the show.

First of all, Syd isn’t a direct adaptation of a comics character, although at least one of her powers mirrors that of young mutant Rogue, whom X-Men fans have seen in previous films, played by Anna Paquin. Syd even covers her wrists with her hoodie sleeves, Rogue-style, assumedly because she’s come to fear touching others, though it has the additional effect of making her look like a teenager. She and David walk through the hospital holding the same piece of fabric because they’re unable to hold hands.

Rogue’s powers are dormant until her skin touches another person’s skin, but the end result of touch is different than Syd’s. While Rogue sucks the life force — and mutant power — out of her “victims,” Syd switches not bodies, nor minds with the other person, but their entire reality. When this happens in Legion, it’s confusing to both David and the viewer.

As far as we can tell, Syd and her victim know they’ve been switched, but they appear to everyone around them as the other person. The effect lasts at least 24 hours until both people suddenly switch back. When David insists on kissing Syd before she’s released in the pilot, the force of the impact throws them both backward. Syd, unable to control David’s omega-level mutant power, telepathically thrusts all the people around her all over the place. When some of them appear in a space already occupied by solid matter — in Lenny’s case, a wall — they’re killed painfully. David, on the other hand, finds his experience as Syd pleasant, because he’s finally free of the voices in his head.

As writer Noah Hawley told Entertainment Weekly, “If [Syd] touches your skin she trades places with you. Her mind goes into your body and the other way around.” Syd’s very name is the central connection Legion has to Pink Floyd, the band which Hawley told Vanity Fair that he wanted his show to sound like.

It’s hard to tell whether Legion’s audience is intended to believe David and Syd truly care about each other. David declares he loves Syd after only knowing her a short time, and the affectations both actors put on as isolated, awkward, mentally ill patients give their childlike interactions a strange tone. It’s revealed later that Syd is far more worldly than she initially lets on, and she hooks David up with a quasi-militarized group of renegade mutants who seem to know her. Now that they’re both free birds, it remains to be seen whether Syd is as enamored with David as he seems to be with her.