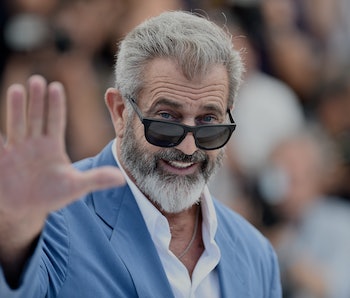 The premise of Suicide Squad was getting a bunch of bad guys — some of the worst of the worst — and making them to do the dangerous dirty work. Now, in the real world, there’s a report that Warner Bros. wants to borrow from the first movie while making the second. The studio supposedly is trying to get Mel Gibson to direct the next installment in the twisted, critically panned franchise.

Gibson, you may recall, became a Hollywood villain in 2006 when he went on an anti-Semitic rant where he claimed, “The Jews are responsible for all the wars in the world!” He also was involved in a domestic violence case and drunk driving arrests, among other offenses.

But, for whatever reason, Hollywood forgave the 61-year-old, and his latest film, Hacksaw Ridge, is up for six Academy Awards.

Now, The Hollywood Reporter says that Warner Bros. is “courting” Gibson to direct the second Suicide Squad, picking up where the original’s director David Ayer left off. According to THR, the studio hasn’t made any formal offer and is looking at other directors as well, but their sources claim that “Gibson is familiarizing himself with the material.”

Gibson, for all his many sins, is a pretty talented director, so he might be able to do something fun with the next movie. However, in addition to his unsavory history, there’s something else that Warner Bros. might be wise to consider — he hated Batman v Superman and seems to hate superheroes in general.

“It’s a piece of shit,” he told Deadline last year. “I’m not interested in the stuff. Do you know what the difference between real superheroes and comic book superheroes is? Real superheroes didn’t wear spandex. So I don’t know. Spandex must cost a lot.”

Suicide Squad 2 doesn’t have a release date yet.