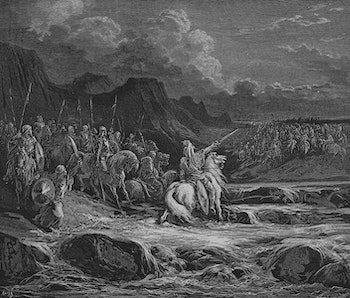 Mel Gibson, the schmuck who got himself blacklisted for famously spewing anti-semitic drunken slurs while calling an officer “sugar tits. That guy should give the Jews a Hanukkah present in the form of a long-awaited Judah Maccabee movie.) Before you say “oy vey” to that or pronounce me meshugganah, here’s why he’s the unlikely best goy for the job.

Let’s break this argument down.

Sure, there are a few modern classics like Munich or The Debt or Defiance or Inglorious Basterds in which Jews kick the ever living shit of Nazis, but there is more to Jewish history than a tough century. Jews have been getting persecuted and doing some persecuting of their own for a very long time. It’s not like everyone just laid around and ate chicken livers after going hiking in the desert.

How many Christmas themed movies can you name off the top of your head? White Christmas, Black Christmas, Elf, Fred Klaus, Bad Santa, Christmas with the Kranks, Jack Frost, A Christmas Carol, Krampus, Spotlight — the list goes on. Hanukkah, on the other hand, has very few dedicated moves, and most of them, think Eight Crazy Nights, suck. The chief evidence of the media not being a massive Jewish conspiracy is the shittiness of Hanukkah films.

Well, maybe not second, but probably top 50. Judah Maccabee was a giant historical badass. He was a warrior two thousand years ago who went on a 300 style stance against the Greeks, leading a rebellion and employing strategies like guerrilla warfare. Happily, he saw a nicer ending than Leonidas, as he lived to see the fruits of his victory, which involved an oil lamp that magically burned for eight days, which may or may not have actually happened but that’s not the point, guys.

Gibson is seemingly bad at life but awesome at movies. And he’s been planning this one for a long while, so he’s presumably thought it out. And he’s sort of been here before — with success. Apocalypto, the Mayan drama he wrote and directed, was pretty damn good.

It’s understandable why the studio killed Gibson’s Maccabee movie plans; talk about a PR nightmare. But with people like Gary Oldman leaping to his defense, the wind might be changing for Gibson. Picture him directing and Jon Stewart — now that he’s got time — writing and Eric Bana and Natalie Portman starring.

Mel Gibson can be in it too. Your bubbe would love that.

More like this
Entertainment
7 hours ago
My Animal is an Intoxicating Werewolf Romance With a Queer Bite
By Isaac Feldberg
Entertainment
2 hours ago
Sharper is a Sleek and Seductive Thriller That Keeps You Guessing
By Lex Briscuso
Entertainment
Feb. 4, 2023
Superman: Legacy Will Reinvent the Man of Steel — Everything to Know
By Eric Francisco
LEARN SOMETHING NEW EVERY DAY.
Related Tags
Share: