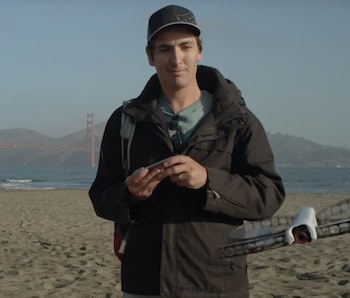 If you’ve wanted to get into drones, but are terrified of a propeller accident or just breaking the thing, a drone startup has started selling its own solution.

Tobin Fisher, founder of Vantage Robotics, was one of those victims reaching for the Band-Aids: “In the amount of time it took me to throw it off it cut me four or five times,” he tells Inverse.

So he built Snap, a video drone with caged propellers. With slick folding features, some durability, and exchangeable components, Snap hopes it can make drone videography easier and considerably safer.

To develop the drone, he tells Inverse that he took advantage of an unusual focus group: Pot smokers and dealers at the end of Haight Street at Golden Gate Park in San Francisco.

“It’s full of pot dealers, people who have bought pot, or people who are currently stoned,” Fisher says. “They proved to be a really good test audience. ‘Can people who are heavily stoned used the test product?’”

It turned out they could, of course. The stoners actually became pretty invested in Fisher’s work. He would mention something that he was working on one day, something like optical flow. The next time he went by, the stoners would ask, “hey, how is it going with the optical flow?”

Fisher says conversations like this were a pretty common occurrence throughout the whole process.

“The whole goal is to make this extremely futuristic thing of a flying camera easy and accessible,” says Fisher. “The issues we are tackling with Snap are safety, portability, and ease of use.”

It seems that freely spinning, merciless plastic rotors might one day be looked at the same way as cars without seatbelts.

“People see plastic rotors and electric motors and assume that they can’t be that dangerous,” he says. “The reality is that when they get moving they can cut you pretty seriously. This is one of the reasons why people tend to fly drones only in remote areas — accidentally hitting a person can be dangerous.”

Fisher and co-founder Joe van Niekerk designed Snap so that if it has a major collision it will fall into distinct components. This minimizes the damage to the entire drone and makes repairs less expensive overall. Although the components aren’t priced yet, Fisher says they will be significantly less than the total $895 price-tag on pre-orders right now.

With its folding technology, Snap can be thrown in a backpack and its components are made to be sturdy enough to withstand a beating, he says. “It’s quite rugged. We do 10-foot drop tests onto concrete.”

When asked if he’d be sending a model to Cleveland Indians pitcher Trevor Bauer, maybe the most famous victim of a drone accident, Fisher laughs and says: “As a matter of fact I’ve had a couple of phone calls with Trevor Bauer, and we are sending him a unit.”