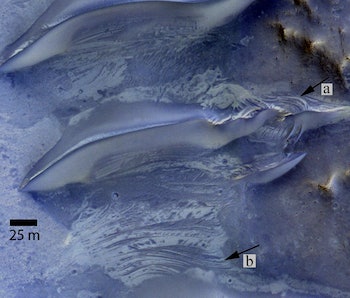 People are dying to know if there is extraterrestrial life on Mars, but it’s not as if NASA can just dispatch a team of robots to scan the entire planet. We have to pick and choose which sites are most promising. Researchers just found one such place — a patch of land in a Martian valley that veers into a pit in the Lucaya crater, which in ancient times was flooded by liquid water.

In a recent study published in Geophysical Research Letters, European researchers studied a coastal dune site in Namibia that’s similar to geographic features found on Mars, and they used their observations to hypothesize that the Martian valley’s formation come from salts left behind from evaporating groundwater.

“These periodic floods leave tell-tale patterns behind them,” Dr. Mary Bourke of Trinity College Dublin, said in a press release. “You can imagine our excitement when we scanned satellite images of an area on Mars and saw this same patterned calling card, suggesting that water had been present in the relatively recent past.”

Desert dune fields on Earth are often flooded by water in areas near lakes, rivers, and coasts, as well as places with fluctuating groundwater. Researchers found patterns on the surface between migrating sand dunes, which were cemented by salts left behind by evaporating groundwater. The dune sediments get left behind as dunes continue migrating downward.

Likewise, the valley on Mars also has fluctuating levels of salty groundwater. The water that flooded the valley in the past has created a deposit of carbonate minerals and groundwater. And where there’s water, there’s an encouraging chance of finding signs of alien life.

“These findings are hugely significant,” Bourke said. “Firstly, the Martian sand dunes show evidence that water may have been active near Mars’ equator — potentially in the not-too-distant past. And secondly, this location is now a potential geological target for detecting past life forms on the Red Planet, which is important to those involved in selecting sites for future missions.”

Water is one of the most important factors for astrobiologists and extraterrestrial researchers in finding out whether life evolved on another planet. That’s why when searching for life, scientists will look in old sites of water, such as a network of riverbeds, ancient lakes, and ice sheets on Mars.

In the coming years, missions like NASA’s Mars Curiosity rover and Russia and the European Space Agency’s ExoMars mission will search for signs of life in exactly these types of places.

Abstract: High and low albedo lineations in a valley entering a pit in Lucaya crater are overlain by a currently immobile dune field. We propose that they are an aeolianite that formed as the overlying dunes migrated. Implicit in this is the suggestion that available water promoted early cementation of evaporitic minerals. We propose that the deposit likely resulted from a combination of locally sourced carbonate minerals and transient groundwater, both of which were made available after the formation of the pit crater. We do not exclude other aerial or subsurface sources of soluble minerals. We report on a pilot regional reconnaissance of images that finds the alternating albedo of dune sediments in Lucaya crater is found elsewhere on Mars. This suggests a regional sediment source at the time of dune activity. We examine a coastal interdune site in Namibia as an analogue for early geochemical cementation and interdune microtopography similar to the features observed on Mars. We find that the curvilinear interdune strata at the field site in Namibia are the preserved lee slope facies deposited by the dune as it migrated. Early cementation occurs in the interdune vadose zone due to precipitation of salts from groundwater. The formation of aeolianite in Lucaya crater supports suggestions by others that moisture is available for a significant period following crater formation. Moreover, it suggests that groundwater flow is sustained near the surface as well as in the deeper subsurface.