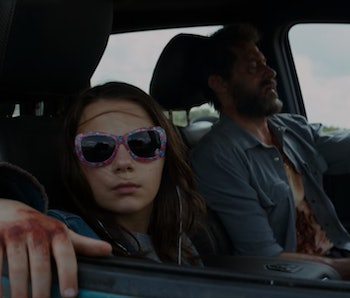 James Mangold, the director of Logan, just released the most disturbing look at X-23 so far. The video, which Mangold posted to his Twitter account this morning, shows a fictional behind-the-scenes look at the gruesome Weapon X medical procedures Laura underwent to become X-23. If you thought Logan had it rough when he was fused with adamantium metal, you haven’t seen anything yet.

The Twitter video posted online at around 4:30 a.m. Eastern today and is shot similar to a found-footage-style horror movie. The handheld camera opens with some eerie scenes of bloody medical tools and an equally bloody medical table. The camera then pans over some medical apparatuses before switching over to scenes of doctors operating on a young Laura. Despite the purposeful low-resolution of the video, you can clearly make out the dissection lines on Laura’s arms and legs where the doctors are presumably binding her bones with the same adamantium metal as the ones inside Logan.

The key shot is when the camera lingers on Laura’s hands as her bone knives protrude from her knuckles. Unfortunately, the video continues after the moment of her operation and there are later scenes of Laura as she screams in pain and strapped down on a gurney as she’s wheeled away, hopefully into recovery. The final moments of the video are of Laura as she’s observed in a locked confinement room, seen in this video cutting herself to test her own healing factor.

The video is rife with easter eggs from the X-Men universe, including an x-ray image of Laura’s mutant genetics and the white prison cell she is held in is reminiscent of the one she was locked inside of in her comic book origin story. In fact, this video could serve as a short origin story film for X-23 who in the comic books was cloned and experimented on in a Weapon X laboratory since birth.

The footage in the video itself is also reminiscent of the bloody scene from 2003’s X-2 where Wolverine flashes back to his own Weapon X experiment that transformed him into who he is today. But the found-footage style in which the Laura/X-23 video is shot lends to its intensity, making the video even more gruesome and uncomfortable to look at.

Like the black-and-white photos, this video is the kind of surprise, guerrilla advertisements that have made the promotional campaign for Logan so memorable, but this is by far one of the darkest things the director has put out for Logan by a wide margin.