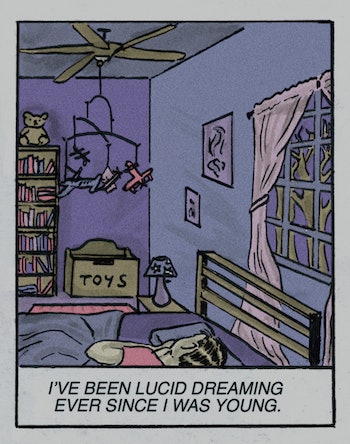 For as long as humans have been self-conscious — aware of their own existence and the direct consequences of their actions — dreams have offered a break from reality. That break can be joyful or terrifying, but it is only empowering to those who lucid dream, consciously existing outside of reality within worlds governed by impulse. For those people, dreaming is both unreal and, on a personal level, deeply real.

The neural activity evident in people who practice mindfulness and meditation seems to be directly correlated with lucid dreaming. Still, lucid dreams can crop up out of nowhere. A 1988 study by researchers Jayne Gackenbach and Thomas Snyder found that about 20 percent of the population reported having lucid dreams once a month or more.

“Humans are able to consciously reflect on the state of consciousness while awake,” says Benjamin Baird, a neuroscientist and dream researchers at the University of Madison-Wisconsin. “During sleep, for some interesting reason that we don’t fully understand, that self-awareness is dampened.”

Zach Fishbein can attest to this. An aerospace engineer at space tech company Orbital ATK, Fishbein has been able to lucid dream since childhood. His first experiences were heavy on adrenaline: He attempted to fly around the world or jump off waterfalls. These more extreme scenarios tend to be typical of early lucid dreamers. As he has gotten older, lucid dreaming has become more of a way for him to solve problems and, ultimately, sleep longer.

As a novice lucid dreamer, he would often fly fighter jets. He’s never done so in real life, but he is, after all, an aerospace engineer. It’s only natural that he should dream of flight. Being a generous guy, he shared that dream with Inverse.