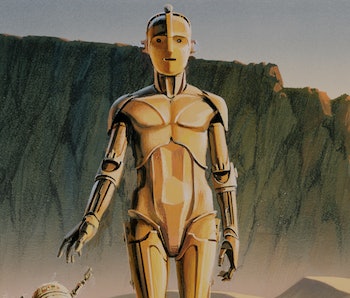 Though the male-gendered C-3PO and R2-D2 might have a “sexual relationship,” there has only been a handful of female-gendered droids in the Star Wars galaxy, though that might be changing. New rumors point to the Han Solo movie having a new “female droid,” which, if true, would actually bring Star Wars back to its conceptual and chronological roots.

Reported on Slash Film but originating on Tracking Board, the rumor states that that the Han Solo movie will have “the first significantly-featured female droid in Star Wars history.” This droid will supposedly be played by Phoebe Waller-Bridge.

While it would be cool to get a new female droid in a big role in the Han Solo film, this wouldn’t be the first female droid in the Star Wars canon. The very first scene in Star Wars: Episode One had a female droid: TC-14. And then there’s R2-KT, a pink astromech droid who appeared in The Clone Wars.

Plus, concept artist Ralph McQuarrie originally envisioned the most famous Star Wars droid of them all, C-3PO, with a slightly more feminine physique. Early pre-production sketches for C-3PO have the droid bearing a close resemblance to the famous female robot from the 1927 groundbreaking science fiction film Metropolis. Obviously, C-3PO eventually became more masculine, but that doesn’t mean McQuarrie’s old sketches won’t be used as inspiration for the new droid. Many of McQuarrie’s concepts for stormtrooper helmets — and even the design of the alien Zeb — have found new life on Star Wars Rebels.

The Han Solo-centric movie is filming now and opens sometime in 2018. Here’s everything we know about it so far.

More like this
Entertainment
4 hours ago
Why the most-derided Star Wars scene ever changed cinema for the better
By Ryan Britt
Entertainment
8.7.2022 1:00 PM
ILM legends reveal the sci-fi movie that changed everything wasn't Star Wars
By Ryan Britt
Culture
8.4.2022 11:30 AM
You need to watch the most successful sci-fi thriller on HBO Max ASAP
By David Grossman
Related Tags
Share: