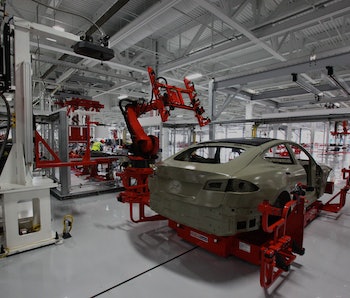 Update, 2:26 p.m.: This story has been updated to include an official statement from Tesla.

On Friday, the United Automobile, Aerospace and Agricultural Implement Workers of America weighed in on the controversy over working conditions at electric car maker Tesla’s manufacturing plant. The UAW issued a statement in which the organization suggested that Tesla CEO and founder Elon Musk has deliberately misled the public on this issue.

On Thursday, a person claiming to be a Tesla employee wrote a Medium post in which he accused the electric car company of maintaining unsafe working conditions at its factory in Fremont, California, requiring employees to work excessive overtime, and fostering an atmosphere in which workers are too scared to unionize. Musk responded to these criticisms, telling Gizmodo via Twitter DM that Moran “was paid by the UAW to join Tesla and agitate for a union. He doesn’t really work for us, he works for the UAW.”

But in the UAW’s Friday statement, the union flatly refuted Musk’s allegation. “Mr. Moran is not and has not been paid by the UAW,” reads the statement. “We would hope that Tesla would apologize to their employee, Mr. Moran, for spreading fake news about him.”

“Fake news” has become a familiar accusation in recent months, bandied about by politicians, data scholars, and social psychologists as a catch-all term for misleading or false stories in popular media. It’s been used so much that it’s begun to ring hollow. But in this particular case, it seems that at least one party is not telling the truth. Musk’s statement and the UAW’s statement directly contradict each other.

Adding yet another layer of mystery to this situation, Gizmodo reported on Friday morning that, “A Tesla-employed Jose Moran profile has been created on LinkedIn. To the best of our knowledge it did not exist yesterday afternoon.”

When Inverse reached Tesla for comment, a Tesla spokesperson would not go on-the-record, but gave the following statement:

As California’s largest manufacturing employer and a company that has created thousands of quality jobs here in the Bay Area, this is not the first time we have been the target of a professional union organizing effort such as this. The safety and job satisfaction of our employees here at Tesla has always been extremely important to us. We have a long history of engaging directly with our employees on the issues that matter to them, and we will continue to do so because it’s the right thing to do.